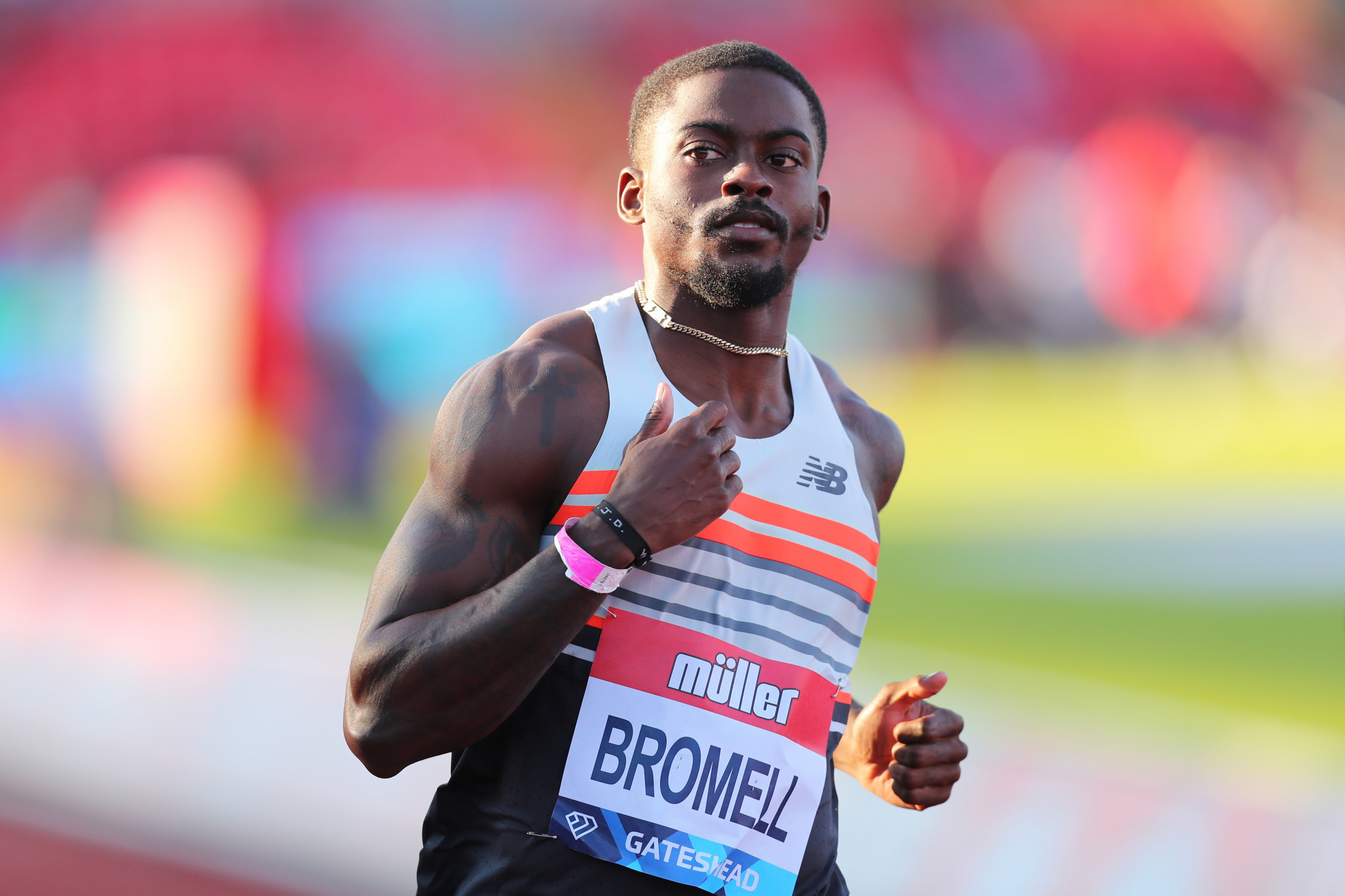 Bromell, who gave a tepid performance at last Friday’s (July 9) Diamond League meeting in Monaco, where he finished fifth in 10.01sec behind compatriot Ronnie Baker, who won in 9.91, controlled his race from gun to tape tonight to win in 9.98.

Britain’s Chijindu Ujah and Zharnel Hughes came second and third respectively in 10.10 and 10.13.

Jamaica’s Rio 2016 100m and 200m champion Elaine Thompson-Herah earned a comfortable victory over the longer distance, clocking 22.43 in a race that was to have included Britain’s world champion Dina Asher-Smith until she withdrew earlier this week as a precaution because of a tight hamstring.

Thompson-Herah has recaptured her best form over 100m, clocking 10.71 this season, just 0.01 slower than her winning Rio 2016 time, but her form at 200m has been slightly less commanding.

Two fellow Jamaicans have bettered her 2021 best of 22.02 this season - Shelly-Ann Fraser-Pryce, who ran 21.79 to win last month’s national trials, and Shericka Jackson, who clocked 21.82 behind her.

Meanwhile US trials winner Gabby Thomas has run 21.61, putting her second on the all-time list behind the late world record-holder on 21.34, Florence Joyner-Griffith.

Thompson-Herah got an excellent start and ran a smooth bend but had to accelerate in the second half of the finishing straight to hold off the challenge of Britain’s Jodie Williams, who ran a season’s best of 22.60, and Blessing Okagbare of Nigeria, third in 22.61.

While it was hardly ideal sprinting weather in the north-east of England, there was at least sunshine on this occasion unlike the first Diamond League meeting at this arena, following Rabat’s withdrawal from hosting because of COVID-19 reasons, when wind and rain blasted all involved.

Williams followed up with an impressive performance in the 400m 45 minutes later as she finished strongest in the field to earn second place in a personal best of 50.94 - breaking 51 seconds for the first time - as Jamaica’s Stephenie Ann McPherson won in 50.44 despite decelerating over the final 50m.

Britain’s men’s 4x100m team gave themselves a Tokyo boost as they got the baton round smoothly to win in 38.27, the fastest run in the world this year, with Nethaneel Mitchell-Blake, who anchored the team to victory at the 2017 World Championships in London, just getting to the line ahead of the fast-finishing Rio 2016 bronze medallist Andre De Grasse of Canada, who clocked 38.29.

The concluding men's 3,000, came down to a cat-and-mouse run by Stewart McSweyn of Australia and Spain's Mohamed Katir, with the latter producing an irresistible final lap to win in a national record of 7min 27.64sec, the second-fastest time run this year, with McSweyn clocking 7:28.94 and Britain's Andrew Butchart taking third place in a personal best of 7:35.18 on the track christened by local hero Brendan Foster with a world 3,000m record of 7min 35.2sec in 1974.

Femke Bol and Shamier Little played it again over the 400m hurdles, and for the third time running the Dutch athlete finished first and the US athlete second.

But Bol’s winning margin was greater than on the two previous occasions as she came home in 53.24sec, with Little, who missed out on Tokyo qualification by one place at the US trials, clocking 54.53 ahead of Jamaica’s Janieve Russell, who clocked 54.66.

Much was expected of Germany’s Johannes Vetter, whose effort of 97.76 metres in Poland last September put him second on the all-time javelin list behind the 98.48m world record set in 1996 by the Czech Republic’s Jan Železný.

He won with a final-three effort of 85.25m, but it was hardly what he would have been hoping for in what Britain’s four-time European champion, Olympic silver medallist and former world record-holder Steve Backley, commentating for the BBC, described as ideal throwing weather.

Trinidadian London 2012 champion Keshorn Walcott produced the second-best effort of the competition, 82.81m, but finished third after managing only 76.74m with his final-three effort, with Germany’s Julian Weber taking second place with 77.16m.

The women’s long jump was won by Ukraine’s Maryna Bekh-Romanchuk with a final-three effort of 6.67m having produced the best of the night, 6.77m, earlier.

Germany’s Malaika Mihambo was second with 6.65m, with Spain’s Fatima Diame third with a final effort of 6.46m, having cleared 6.67 in the earlier rounds.

Mihambo qualified for the jump-off on countback having produced a best of 6.62m that was equalled by Britain’s Jazmin Sawyers.

Portugal’s double world triple jump silver medallist Pedro Pichardo looked confident as he led into the final-three jump-off with 17.29m and then finished with a flourish of 17.50m - ideal stuff to follow up his effort of 17.92m in Hungary on July 6 that heads this year’s world lists.

A men’s 800 metres that lacked Britain’s expected entrant Daniel Rowden was won by Isaiah Harris of the United States as he hung on down the home straight to finish in 1min 44.76sec from another athlete who failed to qualify for Tokyo 2020, Wycliffe Kinyamal of Kenya, who was second in 1:44.91.

Two Americans who will be going to Tokyo, Bryce Hoppel and Clayton Murphy, were fifth and sixth respectively in 1:45.45 and 1:45.72.

Rio 2016 110m hurdles champion Omar McLeod, who will not be defending his title after clattering a hurdle at the Jamaican trials, having arrived for the finals suffering from cramp, looked as if he was going to take a compensatory win tonight until he lost his rhythm after hitting hurdle nine and finished second in 13.42sec.

Britain’s Cindy Sember earned a morale-boosting win in the 100m hurdles - her second Diamond League win at Gateshead this season - against a strong field, clocking 12.69 to finish clear of Payton Chadwick of the US, who finished in 12.75, and Nadine Visser of The Netherlands in 12.78.

Cindy #Sember gives the home crowd something to cheer about for the second time this season in the women's 100m hurdles at #GatesheadDL.

That's surely a place in the #DiamondLeague final locked down for the ?? star.

Kate Grace won a slow and tactical Millicent Fawcett Women’s Mile race lacking the expected attraction of the world 1500 metres champion, Sifan Hassan of The Netherlands, who was scratched as a precaution with a tight hamstring.

Grace, who had set three successive personal bests over 800m since failing to qualify at the US Olympic trials, offered further evidence of what Tokyo will be missing as she took advantage of a slow pace to surge clear down the final straight and win in 4min 27.20sec.

The Emsley Carr Mile, not one of the counting Diamond League events, saw a win for the supposed 800m specialist Elliot Giles, who clocked a personal best of 3:52.49 with three fellow Britons behind him including the favourite, Jake Wightman, who faded to fourth in the final straight and finished in 3:55.78.