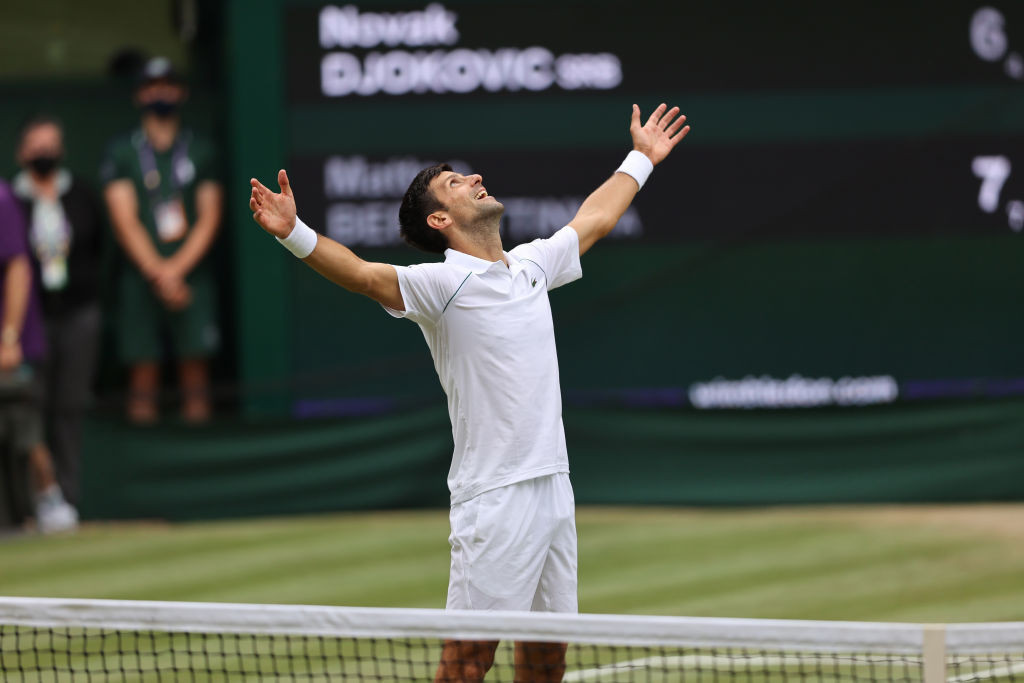 And with victories already secured at the Australian Open, the French Open and Wimbledon, Djokovic is only a US Open win away from a calendar grand slam.

"It was more than a battle," said Djokovic.

"First of all huge congratulations to Matteo for his team on a great tournament and a tough match today.

"It's not the best feeling losing in the final but there's a great career ahead of you and as he says, it's just the beginning.

"Winning Wimbledon was always the big dream of mine when I was a kid and I have to remind myself how special this is and to not take this for granted.

"It's a huge honour and a privilege."

Berrettini, 25, whose previous best showing in a Grand Slam event was a semi-final place at the 2019 US Open, was the first Italian man to reach a Wimbledon men’s singles final and he began nervously.

But he came back from 4-1 and 5-2 down, saving a set point, before winning the first set by seven points to four on a tiebreak - only the second set Djokovic had dropped at the All England Lawn Tennis Club this year.

That proved to be his high point, however, as the top-seeded 34-year-old Serbian, seeking common ground with his two perennial rivals by winning a sixth Wimbledon title in seven finals, moved inexorably towards his ambition.

Although victory over Andy Murray in the 2016 French Open meant Djokovic was holder of all four Grand Slam titles, he was beaten in that year’s Wimbledon and French Open tournaments.

Congrats Novak on your 20th major. I'm proud to have the opportunity to play in a special era of tennis champions. Wonderful performance, well done!

Asked how he felt after equalling the 20 Grand Slams won by Nadal and Federer, Djokovic responded: "It means none of us three will stop.

"I have to make a great tribute to Rafa and Roger, they are legends of our sport and the two most important players I ever faced in my career.

"They are the reason why I am where I am today.

"They showed me what I needed to do to get stronger, physically, tactically and mentally.

"Over the last 10 years it has been an incredible journey that's not stopping here."

On the potential of winning all the Grand Slams in 2021, Djokovic added: "I could definitely envisage that happening and I hope I will give it a shot.

"I'm in great form and played well and having my best form at Grand Slams is my number one priority."