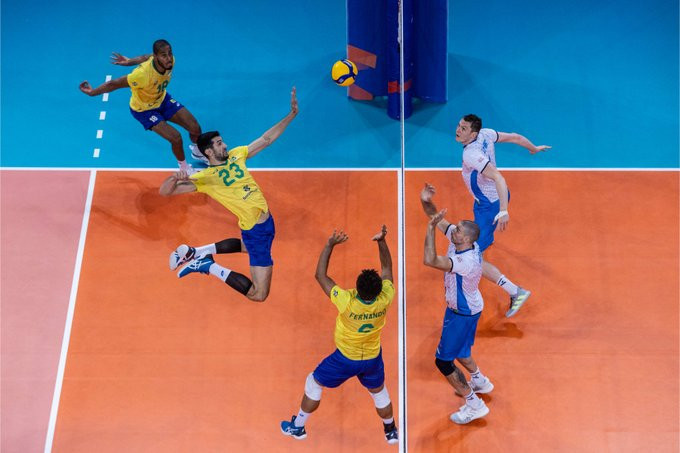 Brazil retained its position at the top of the men's Volleyball Nations League after beating fourth-placed Slovenia 3-2 in a thrilling encounter in Rimini.

The Olympic champions started week four of this competition with their sixth consecutive victory and have now won nine of their 10 matches in this 16-team tournament at the RDS Stadium.

Brazil has 26 points but world champions Poland remains on their heels.

They beat Canada 3-0 for their eighth win of the tournament and are two points behind Brazil.

France, though, slipped after they suffered a shock 3-2 defeat against The Netherlands, who recorded only their second win.

In another surprise, bottom-of-the-table Australia defeated Iran 3-2 to chalk up their first win.

What a way to wrap up the day! A comeback win for the Netherlands ?? against France ?? with an amazing Nimir Abdel-Aziz scoring +40! ? ?

Serbia missed an opportunity of taking advantage of their rivals above them losing.

They were beaten 3-1 by Russia, keeping alive their hopes of reaching the semi-final.

In other matches, the hosts and Olympic silver medallists Italy continue to struggle and were beaten 3-0 by the United States.

Action is due to continue with Poland having the chance to close the gap - albeit temporarily - on Brazil when they play Japan.

Brazil are scheduled to play the last match of the day when they take on Iran.