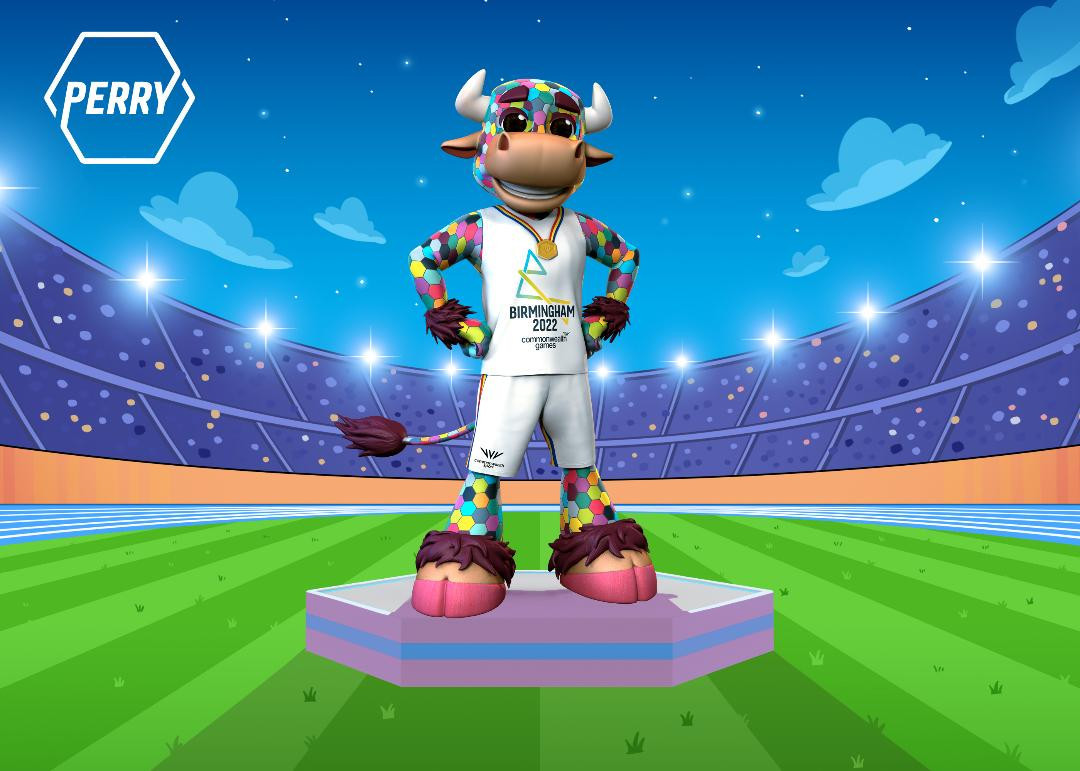 A bull adorned with a patchwork of multi-coloured hexagons called Perry has been revealed as the official mascot of next year’s Commonwealth Games.

The mascot is based upon the design of 10-year-old Emma Lou, winner of a national design competition that took place last summer.

The competition tasked children aged five to 15 with creating a mascot that reflects the identity, heritage and culture of Birmingham and the West Midlands.

The bull is the animal with which Birmingham has been synonymous for centuries.

The city has had a market area known as the Bull Ring since the 16th century and the site is close to the current Bullring shopping centre, with an iconic bronze bull statue at its entrance.

Perry is named after the Perry Barr area of Birmingham, the home of the Alexander Stadium, which is currently undergoing a £72 million ($99 million/€83 million) renovation so it will be ready to host the athletics events at the Commonwealth Games, as well as the Opening and Closing Ceremonies.

It is claimed that the mascot’s rainbow-coloured hexagons represent the coming together of the Commonwealth in equal partnership with the diverse communities of Birmingham and the West Midlands at the Games in 2022, due to take place between July 28 and August 8.

Perry is wearing a medal, designed to reference Birmingham’s iconic Jewellery Quarter, the United Kingdom’s centre for jewellery and precious metals for more than 200 years.

The area still produces around 40 per cent of the country’s jewellery and is home to one of the world’s largest Assay Offices, hallmarking millions of gold, silver and platinum items each year.

The mascot’s sports kit includes blue, red and yellow stripes, a nod to the colours of the official flag of Birmingham, and the city’s motto, "Forward."

Perry will become the first mascot at any multi-sport Games who will be brought to life through augmented reality, giving people the opportunity to #PoseWithPerry using their mobile phone camera, and via a special filter on Facebook and Instagram.

Users can summon an animated, 3D version of Perry into their living rooms, pose for pictures with him, and can share their photos on social media.

An animated video telling the story of Perry’s personality and characteristics has also been unveiled today.

The animation is narrated by comedian Guz Khan, creator and star of critically acclaimed BBC sitcom Man Like Mobeen, a comedic take on life in inner city Birmingham.

Perry joins a family that stretches back to Edmonton 1978 when Keyano, a grizzly bear, became the first Commonwealth Games mascot.

Mascots at previous Commonwealth Games hosted in the UK have been a Scottie dog at Edinburgh 1986 and a cat at Manchester 2002.

Glasgow 2014 became the first Commonwealth Games to choose a mascot that was not representative of an animal when they had the hugely popular Clyde, a thistle.

The winning design for Birmingham 2022 was combined with the findings of the first Virtual Mascot Summit in July 2020, hosted by Olympic heptathlon gold medallist and President of Commonwealth Games England Denise Lewis and television presenter Radzi Chinyanganya from Wolverhampton in the West Midlands.

The summit saw more than 50 children from across Birmingham and the West Midlands take part in tasks to develop the mascot’s characteristics, values and movements, helping to inspire Perry’s personality.

"When I helped to launch the mascot competition last year, I knew the imagination of our children would produce an inspiring and unique mascot like Perry," said Lewis.

"I was blown away by the creativity of the children who took part in the Virtual Mascot Summit, and it’s lovely to see so many of the ideas we discussed come to life in this mascot.

"Perry represents the heritage of Birmingham and the West Midlands, as well as what the modern region stands for. Perry is right up there with the fantastic mascots I’ve seen during my athletics career, and I can’t wait to see him entertaining the crowds during the Games next year!"

Emma Lou was told the news she had won the competition with a special visit from Perry to her home in Bolton.

"I think the mascot is great, he looks so cute.

"I am really excited to come to the Commonwealth Games and it will be amazing to see Perry in the Opening Ceremony.

"I chose a bull because of the Bullring in Birmingham, and I decided to use hexagons because they are the strongest shape and the whole world depends on each other."