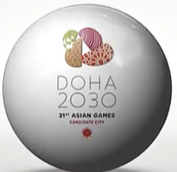 Cue sports are set to return to the Asian Games programme after what will have been a 20-year absence at Doha 2030.

The Asian Confederation of Billiard Sports (ACBS) made the announcement on their website.

Cue sports were first included in the 1998 Asian Games in Bangkok and continued to be a part of the three subsequent events until after Guangzhou 2010 when they were dropped.

"Billiard sports were part of the Asian Games four times till 2010 and now once again we will see our sport in the Asian Games during Doha 2030," said ACBS secretary Michael Alkhoury.

"I must also thank the efforts of the team of Qatar Federation who helped the ACBS in drafting and backing our sport in the bidding of Asian Games 2030."

Among the Asian Games that cue sports appeared at were Doha 2006, the last time the Qatari capital staged the events.

A total of 130 medals were awarded during the four Asian Games that cue sports appeared in.

The leading nation were Chinese Taipei, winning a total of 21 medals, including eight gold.

"Of course, I'm very happy, and am very much looking forward to it," the 25-year-old said.

A campaign is also under way to include cue sports at next year’s Asian Games in Hangzhou, although it is unlikely to succeed.

They are also targeting the 2026 Asian Games in Nagoya in Japan.

Doha was elected as the host city at the 39th Olympic Council of Asia General Assembly in Muscat in Oman in December.