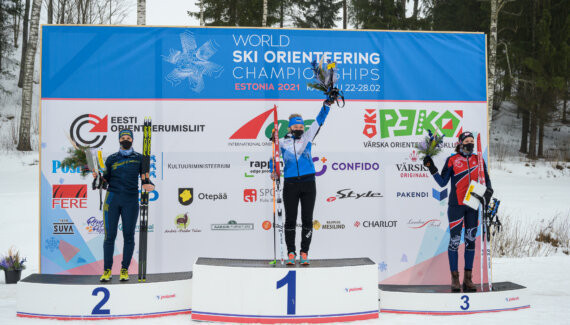 Home athlete Daisy Kudre covered herself, and her country, in more glory at the World Ski Orienteering Championships in Otepää. Estonia as she won the women’s middle distance race, bringing her total of medals so far to two golds and a silver.

Kudre, whose opening victory in the women’s sprint brought Estonia their first ever title in these Championships, added silver in the pursuit race on the following day, and a time of 50min 23sec today saw her finish well clear of her nearest challenger.

Jorgen Baklid won the men’s middle distance, adding gold to the bronze he had won in the opening day’s men’s sprint event.

The Norwegian took two steps up the podium after recording a time of 51min 56sec in the Estonian venue following a competition rest day.

He finished well clear of the silver medallist, Sweden’s Markus Lundholm, who clocked 53.33, closely followed by Switzerland’s Nicola Mueller, who finished in 53.38.

Baklid’s compatriot Auden Heimdal, winner of the men’s pursuit gold, was fifth in 54.27.

The World Championship is due to conclude tomorrow with the sprint relay event.