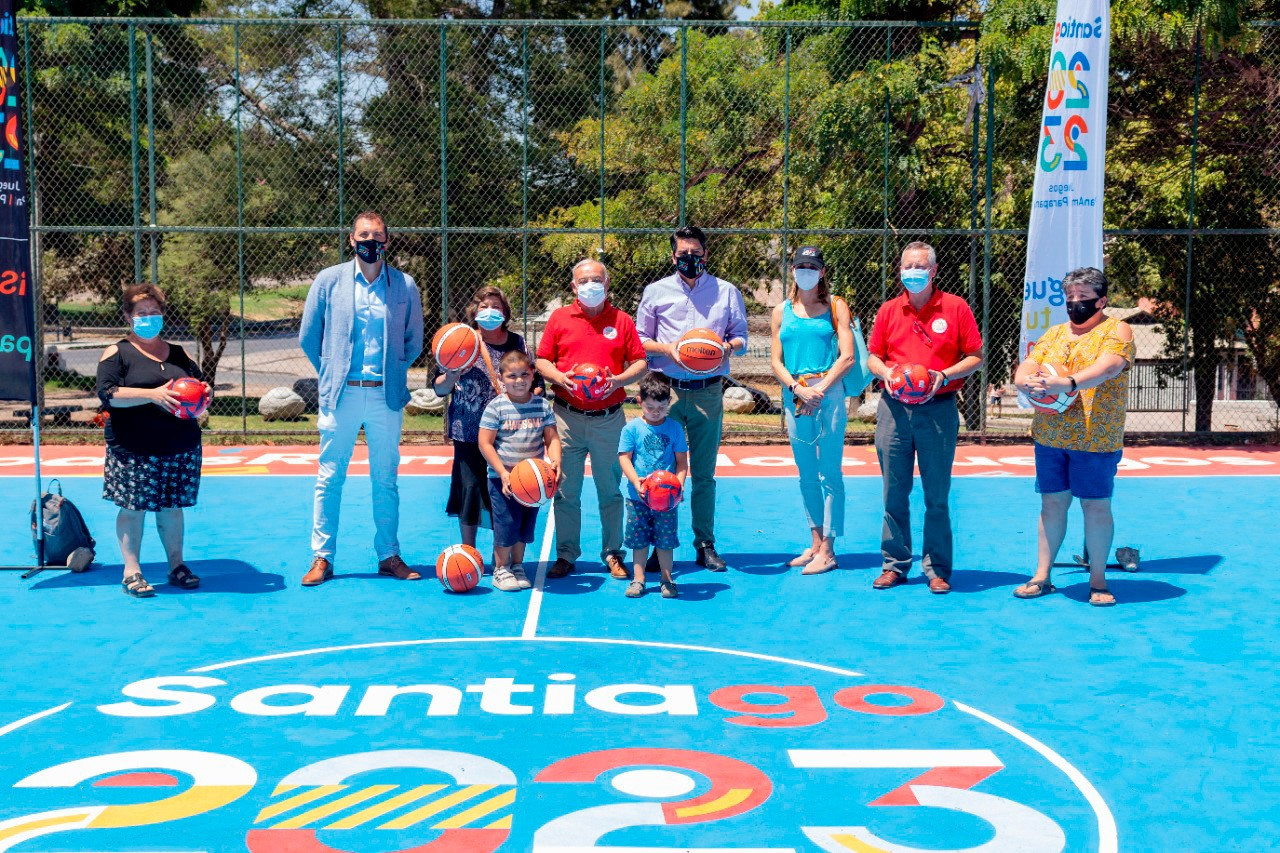 Improving community sports facilities demonstrates that the "community is a key factor in the development of Santiago 2023", according to Pan American Games chief executive Felipe de Pablo.

Two multi-sport courts were upgraded as part of efforts by the organisers of the Santiago 2023 Pan American Games to strengthen their links with the community.

New goals, backboards and colourful flooring were installed at the Víctor Jara court in Cerrillos, where the Pan American Games Athletes’ Village will be built.

Football and basketball balls were also delivered to the community by Santiago 2023.

Arturo Aguirre, Mayor of the Cerrillos district, Isabel Jofré, President of the Neighbourhood Council of the Villa Real, de Pablo and sports area manager Ximena Restrepo arrived at the Víctor Jara Human Rights Square to celebrate the completion of the work.

The Plaza Buzeta court was also revamped, with the renovation of goals and backboards as well as improved flooring and new markings featuring the colours of Santiago 2023.

A ceremony was held at the Plaza Buzeta court and was led by Cecilia Pérez, President of Santiago 2023 and the country’s Sports Minister, last Monday (January 25) to mark 1,000 days to go until the opening of the event.

De Pablo explained the aim of the project was to provide people in the community with the chance to take part in outdoor activities and feel part of the Games.

"The Games belong to everyone and that is what we are celebrating today," De Pablo said.

"To be able to deliver this multi-court and share with the neighbours is to share what the Games are.

"The community is a key factor in the development of Santiago 2023."

Aquirre praised the work of Santiago 2023 and said he was looking forward to welcoming 8,000 athletes to Cerrillos.

Jofré also thanked Santiago 2023 and felt the two multi-sport courts would make a big contribution to the community.

"As Cerrillanos, we are proud that this is happening in our community and it encourages us to continue improving," added Jofré.

Work on the Athletes' Village, set to be turned into social housing following the Games, is expected to start in June following the conclusion of the tender process.

Chile is scheduled to stage the event for the first time when Santiago plays host from October 20 to November 5 in 2023.

Panam Sports said the Santiago 2023 Corporation, the Chilean Ministry of Sport and the Chilean Olympic Committee "have not rested" since the city was awarded the Games.

The body said organisers "continue to work at full speed" with their preparations despite the COVID-19 crisis.