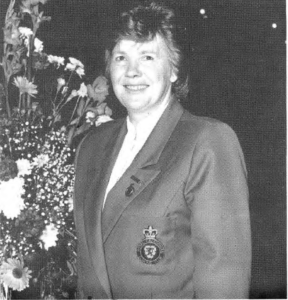 World Curling Federation (WCF) President Kate Caithness has paid tribute to the late women's curling administrator Marjory McLachlan who has passed away at the age of 78.

McLachlan died on October 19 at Strathcarron Hospice in Scotland and is remembered for her administrative roles within women's curling in her home nation under the Royal Caledonian Curling Club (RCCC), now known as Scottish Curling.

Caithness led a tribute on Scottish Curling's website as a long-time friend of McLachlan.

She is remembered for her roles as RCCC Ladies Branch President, RCCC representative to the WCF and the captain of the United States/Scot Tour of 1991.

"She will be fondly remembered by everyone who knew her, particularly for her quick wit and sense of fun," said Caithness.

"I was privileged to be a member of the 1991 Tour and I know I speak on behalf of my fellow tourists when I say how much we enjoyed her 'off the cuff' speeches and remarks during the formal dinners and how proud we were to have Marjory as our captain.

"She will be sorely missed by everyone and our sincere condolences are extended to the family at this time."

Aside from curling, McLachlan was also appointed Lord-Lieutenant of Stirling and Falkirk in November 2005 - a position she held until February 2017.

This honorary position is given to a retired notable person from a certain area of the United Kingdom.

In December 2016, McLachlan was also honoured as a Commander of the Royal Victorian Order by Queen Elizabeth II.