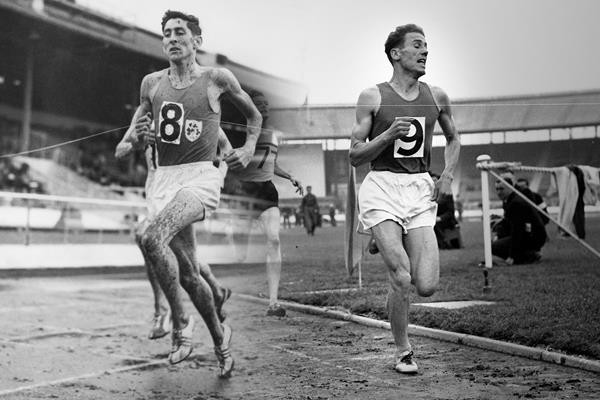 Trophies and race numbers belonging to two of the greatest milers in history, Ireland’s Ron Delany, and Hungary’s late László Tábori, have been donated to the World Athletics Heritage Collection.

A silver bowl, awarded to Delany for winning the 1959 edition of the Philadelphia Inquirer Mile, and the race number worn by Tábori when he broke the four-minute mile for the first time have been donated to the Collection.

Tábori’s two daughters, Gabrielle Sabharwal and Ildiko Tabori, had contacted World Athletics Heritage last month asking to be put in touch with Delany after discovering the silver trophy among their father’s possessions.

Why Tábori had the silver bowl awarded to Delany for winning the race in a meeting record of 4min 05.8sec in his collection remains a mystery but World Athletics Heritage have now been tasked with looking after it.

"Perhaps I had to rush off to catch a train or a plane and so missed the award ceremony and Laszlo kindly took care of it?" the 1956 Olympic 1500 metres champion Delany said.

"Anyway, what a wonderful surprise to find the trophy after so many years.

"I am, therefore, delighted to give the trophy to the World Athletics Heritage Collection.

"I hope it will in turn help remind others of that wonderful era of mile racing."

Tábori, one of the three “Magnificent Magyars” of the 1950s, was the third man in the world to run a sub-four-minute mile behind Britain’s Sir Roger Bannister and Australia’s John Landy.

Three men finishing inside four minutes in the same race was a sensation at the time.

Tábori defected to the United States following the 1956 Olympic Games, where he had finished fourth in the 1500m as Delany clinched the gold medal, following the Hungarian Revolution.

Sabharwal was thrilled by the discovery of the trophy and race number he wore in that historic race in London while sorting through her father’s collection.

"My father and Mr Delany raced each other often, they were more than just opponents," she said.

"They were friends and our families had kept in touch until a few years before my father’s death.

"My father devoted his life to athletics, and it is a great pleasure to donate his competition number from his historic sub-four run to World Athletics Heritage.

"There the number and my father’s memory will be preserved."