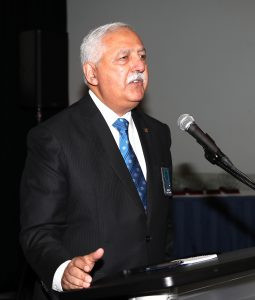 The International Weightlifting Federation (IWF) will be restricted in its attempts to act on the sport’s latest anti-doping corruption scandal until it carries out constitutional reforms in late March.

"The IWF’s commitment to acting on the materials contained in the [corruption] report, however, is very clear," said Mike Irani, the British doctor who became IWF Interim President last week.

Irani said constitutional and governance reform was essential for the IWF, which has been given stern warnings about its Olympic future by Thomas Bach, President of the International Olympic Committee (IOC), this month.

The IWF did "not currently have appropriate provisions" for dealing with Board members who might be implicated in the World Anti-Doping Agency (WADA) report's findings, Irani said.

The American Ursula Papandrea, whose plans for reform had the backing of the IOC, was removed as Interim President by the Board last week.

A petition calling for the entire Board to stand down, started by the IWF Athletes' Commission chair Sarah Davies, has attracted more than 12,700 signatures.

Today British Weight Lifting (BWL) wrote to Irani, who was on its Board for many years, saying the IWF should "appoint a new interim leadership team comprising appropriate individuals with the necessary skillsets but at the same time, with no conflicts of interest or reputational concerns associated with the current or previous IWF Executive Board".

Irani’s response to requests for the Board to resign en masse and call an Extraordinary Electoral Congress was, "We have already called for elections as soon as is practicable, given the need to work towards the objective clearly preferred by the IOC of having both elections and a fresh constitution."

He said 131 of the IWF’s 187 Member Federations "have now indicated their agreement with this ambitious timetable for reform.

"Of course, only the IOC can judge whether we can deal with the situation to its satisfaction, but I am certainly determined to ensure we do all we can for the sake of clean weightlifting and clean weightlifters."

WADA was "appalled" by evidence it uncovered during an ongoing three-year investigation of "a pervasive culture of mismanagement and abuse" in anti-doping procedures.

Certain nations, working in tandem with the corrupt regime of disgraced former IWF president Tamás Aján, would do anything to help their athletes avoid suspension for cheating.

Some of the practices revealed by WADA’s intelligence and investigations department were still happening now, the report made clear.

The corruption included paying millions of dollars in bribes; helping athletes to swap clean urine for dirty urine or to use "doppelgangers" to provide samples; sourcing and encouraging the use of "undetectable" growth hormones; using transfusions to clean an athlete’s system; and paying for "tip-offs" about future testing plans.

Law-enforcement agencies are investigating some of the findings, including in Romania, which was the focus of intense scrutiny by WADA investigators.

Irani was asked to comment on the fact that unnamed current athletes, coaches and officials were implicated in the WADA report.

"The WADA investigation has been years in the making," he told insidethegames.

"It would not be appropriate to comment on individual cases within it after only hours.

"The IWF’s commitment to acting on the materials contained in the report, however, is very clear.

"We have empowered the ITA [International Testing Agency] to cooperate fully with WADA and this cooperation is noted in the report.

"And we can look forward to the ITA diligently and professionally handling the intelligence and suspected anti-doping rule violations mentioned in the report."

This week the IWF signed a long-term contract with the ITA to handle its entire anti-doping procedures including investigation and prosecution.

Did the IWF intend to investigate those Member Federations mentioned in the WADA report in line with the WADA Code, which requires International Federations to ensure its members follow anti-doping rules?

"By empowering the ITA to cooperate with WADA, the IWF has demonstrated more than just an intention to see the issues be investigated," said Irani.

"The IWF has actively invested in seeing that athletes, coaches, officials and Member Federations adhere to their responsibilities to ensure clean weightlifting."

Seven members of the IWF Board are from nations with poor doping records, including two which are banned from Tokyo 2020, Thailand and Egypt.

WADA’s report stated that weightlifting doping in Romania, also represented on the IWF Board, is the subject of a law-enforcement investigation.

Was the IWF happy, Irani was asked, to have members of its Executive Board carry out their IWF duties and make decisions that could be significant in terms of the sport's future, when their own federation is under investigation?

"At this point, it is clearly understood that there is a need to reform the IWF’s governing documents, which do not currently have appropriate provisions for these issues.

"We have set out a deadline for constitutional reform by scheduling the March IWF Congress and we are putting in place a means to deliver the basis of that reform with the Reform and Governance Commission."