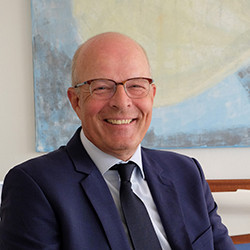 In the complaint, seen by insidethegames, Andersen has alleged Ser Miang – a former sailor who also sits on the World Sailing Ethics Commission – and Neupert have committed "gross violations" of the ethics code.

It marks the latest development in an increasingly bitter Presidential election, where Andersen is being challenged by Seeliger and World Sailing vice-presidents Scott Perry and Quanhai Li, prior to voting starting on Friday (October 9).

Andersen alleged Ser Miang, chairman of the IOC Finance Commission, had violated ethics rules by failing to disclose his conflict of interest regarding a meeting he held with Seeliger, European Sailing Federation President Josep Pla and sailing official Gerard Esteva.

According to the complaint, which cites a witness statement from IOC Athletes' Commission liaison Patrick Singleton, Esteva confirmed he was "helping to drive Gerardo's campaign efforts to become the next President of World Sailing, and that they were spending time in Lausanne meeting with supporters to help get Gerardo elected in the fall of 2020".

"While I did not hear the conversation between Gerardo Seeliger, Josep Pla, Ser Miang and Gerard Esteva, it appeared to me based on my conversations with Gerardo and Gerard that day that the four of them were discussing how they could support Gerardo's campaign to run for President of World Sailing," Singleton said in his witness statement.

Andersen claims Ser Miang "failed to disclose" the 45 to 60-minute meeting and also "failed to provide any explanation or objection to the above when Mr Singleton's witness statement was submitted".

The incumbent President claimed that Pla should also not have been appointed as an ethics officer in an Ethics Commission case against him concerning alleged abuse of the signatures of two World Sailing vice-presidents, Perry and Garry Jobson, because he was "openly assisting" Seeliger in the Presidential campaign, according to Singleton's witness statement.

Andersen also believes Pla's appointment was "clearly not independent or impartial" because the Andorran had written a letter to him in March 2019 suggesting issues with the Dane's leadership, where he outlined his "growing concern about the course World Sailing is taking in its relationship with its members".

Ser Miang, a high-ranking IOC official, "did not raise any objection to the appointment of Mr Pla" as an ethics officer when it was "clear that too was a conflict of interest", Andersen alleges.

The accusations regarding Pla were made in Andersen's complaint against Neupert, who the Dane claims has committed four breaches of the ethics code – "a clear conflict of interest", and "continuing to act as chairperson of an improperly constituted Ethics Commission".

It also cites "failure to respect the principle of confidentiality" and "perpetuating a falsehood that our client was trying to 'get rid' of the Ethics Commission".

Among the allegations in the complaint are that Neupert should not have chosen Pla as an ethics officer because of his supposed conflict and the Swiss official "refused to reconsider" his decision.

Neupert, the subject of controversy after he featured in the leaked Panama Papers documents and has held power of attorney for offshore trusts owned by Vasily Anisimov, a Russian oligarch and close supporter of President Vladimir Putin, also stands accused of giving confidential World Sailing Ethics Commission documents to the media.

The World Sailing Ethics Commission decision to issue Andersen with a warning for "abusing Jobson" and Perry's signatures "was in all likelihood" leaked by Neupert to the respected sailing publication Seilmagasinet, the complaint states.

The document by the law firm also claimed the three ethics complaints levelled at Andersen were "spurious" and had been "brought by various individuals within World Sailing seemingly acting in concert, for alleged violations" of ethics rules.

"The handling of these cases...has brought to light – ironically – the unethical manner in which the individuals carry out their functions on the Ethics Commission," the complaint reads.

"Moreover, it has made a mockery of the regulations and has unfortunately allowed the Ethics Commission and Ethics Code to be abused for political purposes by certain individuals in the sailing community."

insidethegames revealed yesterday the three ethics issues faced by Andersen were a concern of the IOC, which warned the allegations against him – and the fact Perry is banned from entering the United States – could damage World Sailing's reputation.

Andersen, Ser Miang and Neupert have been contacted by insidethegames for comment on the ethics complaint.