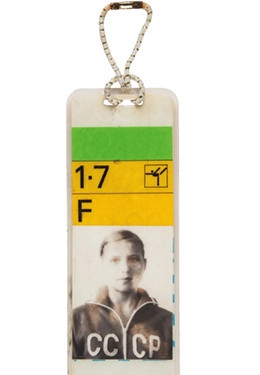 Competing for the Soviet Union, Korbut won three gold medals in the team, balance beam and floor exercises and a silver in the uneven bars at Munich 1972 with a series of charismatic performances that captivated audiences around the world.

Nicknamed the "Sparrow from Minsk", Korbut's 1972 Olympic performances as a 17-year-old are widely credited as redefining gymnastics, changing it from emphasising ballet and elegance to acrobatics as well as changing popular opinion of the sport from a niche discipline to one of the most popular sports in the world.

Korbut won another Olympic gold medal in the team event at Montreal 1976 and silver in the balance beam before retiring a year later at the age of 22.

The accreditation tag and ponytail were sold by Heritage Auctions in an online sale.

The tag displays an image of Korbut on the front, while her name is typed on the back.

Also included was a white ponytail band that Korbut wore during her historic performances at Munich 1972 and a letter of provenance from Korbut.

Korbut also sold her Munich floor exercise gold, the silver won on the uneven bars, and a team gold and balance beam silver from Montreal 1976.

At the time the Russian media claimed that Korbut, who has lived in the United States since 1991, had been forced to sell her memorabilia "to fight off hunger."

But Heritage Auctions claimed Korbut, who turned 65 earlier this year, had just wanted to pass on the medals to people that would enjoy them.

The auction also featured items from the career of Muhammad Ali, who, as Cassius Clay, won the Olympic heavyweight boxing gold medal at Rome 1960.

The top-seller were the boots that Ali wore in his 1975 “The Thrilla in Manila” fight against Joe Frazier, who succeeded him as Olympic champion at Tokyo 1964.

The “Thrilla in Manila” was the third and final match between Ali and Frazier and actually took place in Quezon City in the Philippines.

Ali won by technical knockout after Frazier's chief second, Eddie Futch, asked the referee to stop the fight following the end of the 14th round.

The contest's name is derived from Ali's rhyming boast that the fight would be "a killa and a thrilla and a chilla, when I get that gorilla in Manila."

It is claimed that it was watched by an estimated television audience of one billion.

The shoes were retained by Ali's assistant and close friend Drew "Bundini" Brown, and it is his handwriting in blue marker on each interior tongue – “Mo Speeed” - a good luck mantra also present within Ali's shoes from the second Frazier contest in New York City in 1974.

The fight in Kinshasa in Zaire, saw Ali regain his heavyweight world title by knocking out Foreman, the 1968 Olympic gold medallist, in the eighth round.