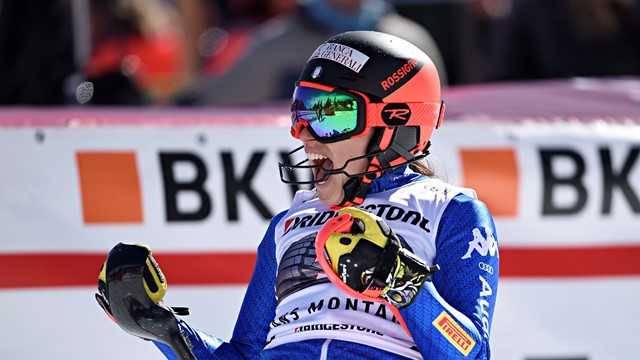 The third edition of the event was organised by La Gazzetta dello Sport in collaboration with the Cortina Foundation, the Italian Winter Sports Federation (FISI) and car manufacturer Audi.

Top athletes from the 2019-2020 season were awarded the Golden Bow, with Brignone receiving the award after becoming the overall International Ski Federation (FIS) Alpine Ski World Cup champion, as well as the giant slalom and Alpine combined winner.

Wierer had similar success in the International Biathlon Union World Cup as she won the overall and mass start competitions last season to also earn the Golden Bow.

Cross-country skier Federico Pellegrino was recognised for making three podiums last season, while Lara Malsiner was too for achieving her first FIS Ski Jumping World Cup podium as well as a bronze medal at the World Junior Ski Jumping Championships.

Winner of the Golden Crystal was Arianna Fontana, with the short track speed skater aiming to reach a fifth Winter Olympics at Beijing 2022.

Charlène Guignard and Marco Fabbri received the silver equivalent for their work in figure skating.

FISI President Flavio Roda was present at the ceremony and congratulated the athletes for achieving their results, despite the season being cut short due to COVID-19.

The FIS Alpine Ski World Cup Finals in Cortina d'Ampezzo were cancelled because of the pandemic.

It was also announced that Brignone had became an ambassador for the Cortina 2021 Alpine Ski World Championships mascot, Corty.

"I am very happy and proud to have been chosen as ambassador for Corty, the mascot of an event so important and awaited by all of us Italians," Brignone said.

Corty, nicknamed after the location of the 2021 Championships, is a red squirrel.

The event is due to be held five years before Cortina, along with Milan, hosts the 2026 Winter Olympic and Paralympic Games.