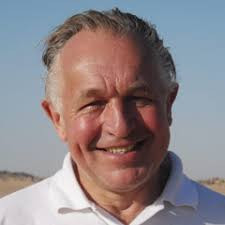 Gerardo Seeliger, who is set to challenge Kim Andersen for the top job at World Sailing later this year, has called for the Presidential election to be held virtually because of the coronavirus pandemic.

The election is scheduled to take place during World Sailing's Annual General Meeting (AGM) in Abu Dhabi on November 1, but the event has been thrown into doubt due to the COVID-19 crisis.

Staging the AGM virtually is one of three main options being considered by World Sailing under contingency plans being drawn up in case the key meeting cannot go ahead as planned.

Under World Sailing's constitution, governed by Isle of Man law, the AGM must be held this year and a decision on the status of the event is expected to be made on August 1.

Seeliger, who now calls himself a "pre-candidate" as World Sailing's election rules stipulate that officials cannot formally be declared as candidates until they have been proposed by five member national associations (MNAs), told insidethegames he supports the idea of a virtual meeting.

"Many countries will not dare to come because of the global situation, which is a major problem," Seeliger said.

"A lot of countries cannot afford to come.

"An election with say 40 or 50 members is simply not good enough, when you have 140 members that technically could participate.

"Some people want to communicate before the election, a lot of things happen in the corridors, but today with videoconferencing you can achieve the same thing.

"I am in favour of an electronic vote with 100 nations, for example, which would be a true democratic vote in my view."

The veteran Spaniard, who competed in the Finn class at the 1972 Olympic Games in Munich, said a professional worldwide auditing firm should be used to conduct the election.

Seeliger said World Sailing could learn from the likes of World Rugby, which recently held a remote election for its top position, overseen by PricewaterhouseCoopers.

"I trust 100 per cent if the electronic voting is done in that fashion, with a professional reputable worldwide firm," he added.

"In the past, there have been rumours that some candidates have paid the trip of some countries to come and vote, this will not happen if we have electronic voting."

Travel restrictions and bans on mass gatherings imposed across the world to combat the spread of the virus would need to be lifted in order for the annual meeting in Abu Dhabi to be held as scheduled, which is one of the other options being discussed.

Some MNAs have also asked for a "middle ground" option - holding the AGM as planned but allowing those unable to travel to Abu Dhabi to cast their vote electronically - to be considered, according to Andersen.