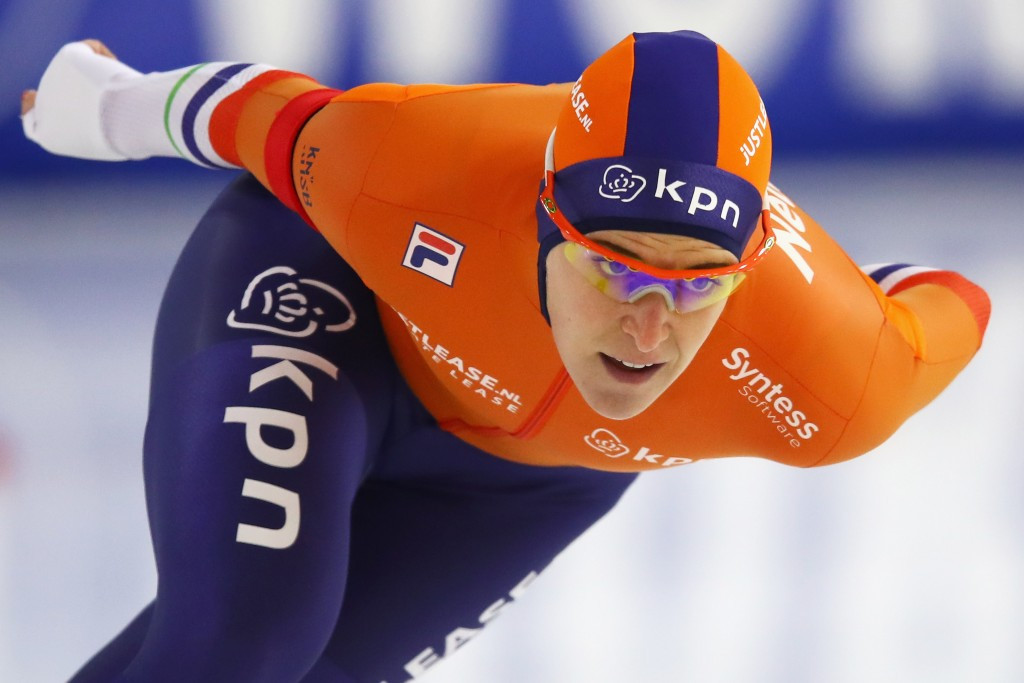 Track records fell in four of the six disciplines on the second day of the ISU Speed Skating World Cup Finals in the Netherlands.

The first event of the day at the Thialf Stadium in Heerenveen was the ladies 1500m which saw Dutch skater Ireen Wust set the tone for the day by skating a new track record of 1min 53.101sec, taking 0.20 secs off her own 2018 mark.

Wust took the overall World Cup title by 82 points, finishing on a total score of 342.

The next event on track was the men's 1500m where again a track record was broken, this time by Kjeld Nuis of the Netherlands in 1:43.000.

Nuis' win in the final race helped him take the overall title by 16 points ahead of Zhongyan Ning of China on 266, with Ning placing fifth in the day's race.

Third place overall went to Krol with 259 points, ahead of Roest.

The track record theme continued in the day's third event, the ladies 1500m, won by Russia's Angelina Golikova in 37.023.

Kodaira's second place was enough to give her the overall World Cup title with a total of 528 points.

She finished 24 points ahead of Golikova, whose win in the final race of the season was not quite enough to give her the overall title.

Third place overall went to Olga Fatkulina of Russia, who finished fourth in the day's race.

The fourth event of the day, the men's 500m, also saw a fourth track record with Tatsuya Shinhama of Japan setting a new fastest time of 34.070.

Shinhama's record-breaking performance secured him the overall World Cup title as he finished on 483 points, 50 ahead of closest challenger Viktor Mushtakov of Russia, who could only finish fourth in the final race.

The next event was the ladies mass start won by Melissa Wijfje of The Netherlands in 8:11.740.

Second place on the day went to Maryna Zuyeva of Belarus on 8:12.540 with third going to Wijfje's compatriot Irene Schouten in 8:30.630.

Despite only placing fifth in the final race, Canada's Ivanie Blondin won the overall World Cup title with 548 points, running out a comfortable winner ahead of Schouten with 492.

Nana Takagi of Japan placed third in the overall standings with 442 points.

The final World Cup event of the competition was the men's mass start which was won by Jaewon Chung of Korea on 7:47.060.

The overall title went down to the narrowest of margins, with Swings' second place finish on the day enough to give him the crown by just a single point.

Swings finished on 570, a point ahead of Mantia, with Chung's final day win helping him to third overall on 462 points.