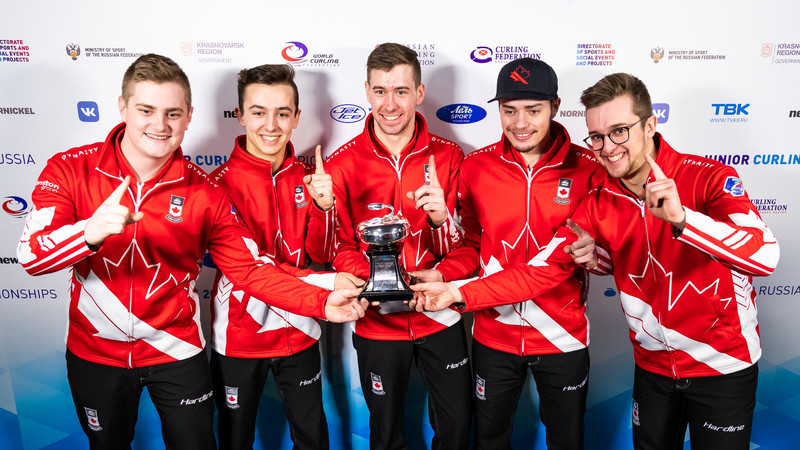 Canada struck gold twice, making up for their slow start to take the men's and women’s titles at the World Junior Curling Championships at the Crystal Ice Arena in Krasnoyarsk in Russia.

They retained their junior men’s world title after a dominant 7-2 victory over Switzerland, which never looked in any doubt.

However, the reigning champions were firmly in the driver’s seat at the start of the second half having taken two, followed by a steal for two and a steal for one.

Sitting at 7-1 after eight ends, Switzerland’s last hope was a strong showing in the ninth, but after picking up one point, the silver medallists conceded defeat.

Swiss skip Marco Hösli made his second straight final having lost to the last Canadian team skipped by Tyler Tardi and could not go one better this time.

Canadian skip, Jacques Gauthier said after the game, “It’s unreal, it was our first final and the boys played really well.

“To the fans back home and the girls’ fans cheering us on, thank you so much for sticking with us and following along the whole week, making us feel like we weren’t in the middle of Siberia by ourselves.”

Switzerland 🇨🇭 draw for a single point in the ninth end, but the gold medal goes to Canada 🇨🇦 after an error-free display. 👏🥇#WJCC2020 #curling pic.twitter.com/72lbJ5inSR

In the women’s final, South Korea finally lost in the tournament after Canada turned them over late in the game to win 7-5.

The team, skipped by Kim Min-ji, won nine out of nine matches in the groups before defeating Japan comfortably to make the final.

Early in the match, South Korea looked in control after scoring three in the third and stealing one in the fourth to go 4-1 up.

Canada replied with three to bring the game level and after trading one point end wins each, the two sides went into the ninth at 5-5 with Canada having the hammer for the final end.

But the undefeated rink collapsed in the ninth end allowing their opponents to steal two and after being curtailed in the final end, despite having the hammer, they conceded defeat, taking the silver medals, for their best result since 2014.

In the women’s bronze medal match, Russia obliterated Japan 14-4 with the hosts taking full advantage of the hammer, scoring five in the third end and four in the seventh.

By halftime, last year’s winning skip Vlada Rumiantseva had her side winning 10-1 and victory was never in doubt as their opponents conceded after eight ends.

Scotland recovered from their defeat to Switzerland in the semi-finals to hold their lead in a close contest against Germany.

The first half saw three of the five ends blanked with the score at 2-2 before Germany stole one in the sixth to take a lead.

The vital moment in the match came in the seventh when the Scots, skipped by James Craik, scored three before stealing one in the eighth.

It was now about holding their lead and despite their opponents scoring two in end nine to make it 6-5, Scotland blanked the final end with the hammer advantage to take their second consecutive bronze and third medal in a row.