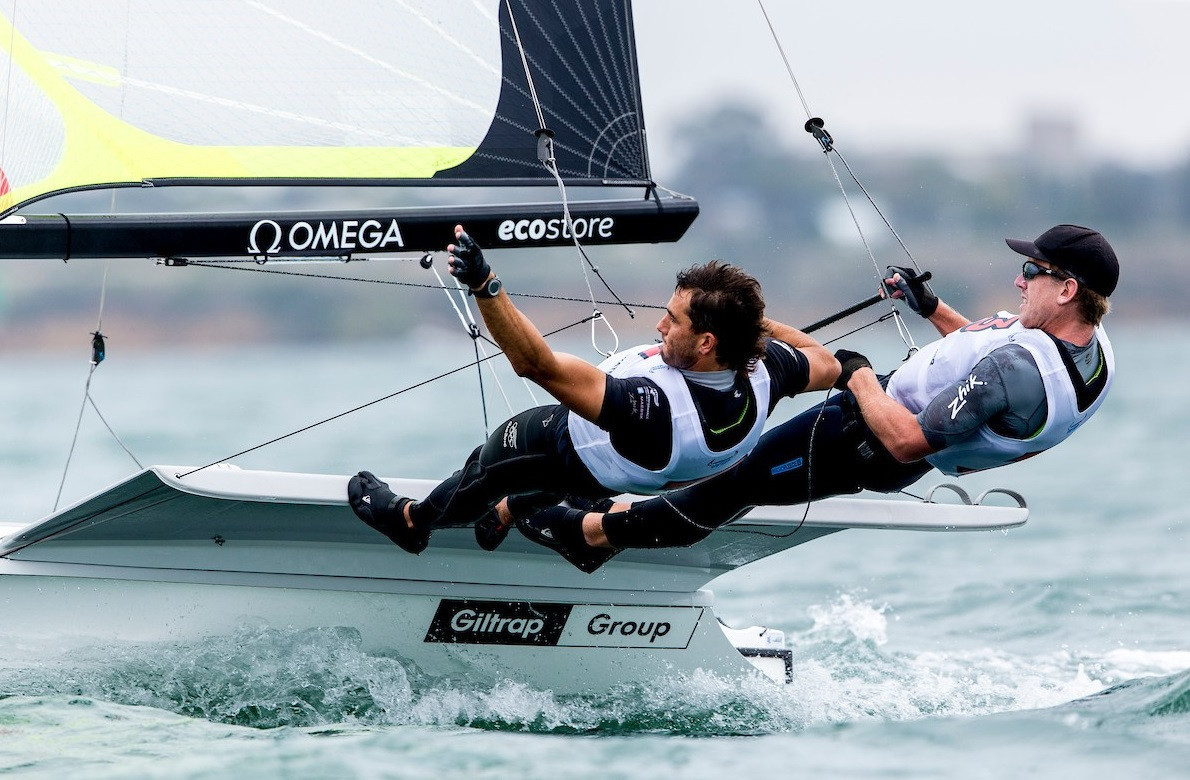 New Zealand's Peter Burling and Blair Tuke moved into the lead at the 49er, 49erFX and Nacra 17 World Championships as the Olympic gold medallists continued their bid for a sixth global title.

The 49er pair won two races and finished third in the other on the second day of racing at Royal Geelong Yacht Club in Australia.

Their fifth-place finish from yesterday has now been discarded as their worst result, leaving them on top of the pile with seven points from six outings.

The top 25 crews will now all advance to the gold fleet for the rest of the Championships, where they will fight for medals.

Burling and Tuke won the fifth of their world titles on home water in Auckland just weeks ago, as the 2019 Championships only took place in December.

They climbed up to first place today having been third overnight.

"It's good to get through the qualifying series with some low scores, we didn't sail our best at times, but we had some pretty good comebacks to make up for it," said Burling.

"It was pretty tricky out there, plenty of shifts.

"Tomorrow looks pretty similar in terms of the forecast, it should be nice.

"All the good guys are still here and pushing hard."

Britain's Dylan Fletcher-Scott and Stuart Bithell led coming into today but have slipped down to eighth on 24 points after a disqualification.

They also came seventh and 13th after two wins yesterday.

They are yet to finish outside of the top three.

Spain's Diego Botin and Iago Lopez Marra moved up to third after two race wins and a third, which left them on 10 points.

In the Nacra 17, Britain's John Gimson and Anna Burnet kept hold of their overnight lead.

They claimed two race wins today but also recorded a 20th-place finish which is currently discarded.

It leaves them on 14 points at the top of the standings.

"Two wins, chuffed with that but then in the last race we made a stupid mistake," said Gimson.

"We made a slightly late decision to tack and went swimming."

Australian siblings Nathan and Haylee Outteridge stay in second after two second-places and a 17th left them on 17 points.

Quentin Delapierre and Manon Audient of France were sixth, sixth and eighth to move up to third on a tally of 29.

They have a two-point advantage over Italy's defending world champions Vittorio Bissaro and Maelle Frascari while Argentina's Olympic gold medallists Santiago Lange and Cecilia Carranza are eighth on 45 points.

Britain also lead in the 49erFX after Charlotte Dobson and Saskia Tidey took over pole position from Germany's Tina Lutz and Lotta Wiemers.

Two second-places and a third were enough to propel them to the summit on nine points.

"Today was a great day, it was about being as consistent as possible," Dobson said.

"We went super low risk and let our pace do the talking."

Spain's Tamara Echegoyen and Paula Barcelo remain in second position after a race win, a second and a third gave them 11 points.

That is a gap of 10 to Denmark's Anne-Julie Schutt and Iben Nielsby, who were third, fourth and 10th today.

Lutz and Wiemers have slipped to sixth place on 26 points.

Dutch crew Annemiek Bekkering and Annette Deutz, who are hoping to win a third consecutive world title, are down in 14th on 40 points.

Racing continues at the event tomorrow.

It is a key competition before the Tokyo 2020 Olympics, with sailors battling for national selection.