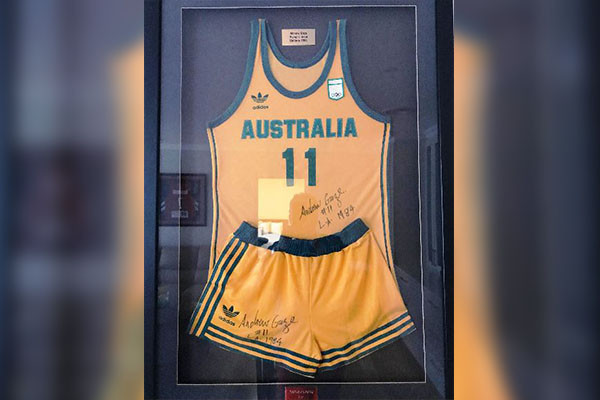 Australia’s greatest-ever basketball player Andrew Gaze’s signed uniform is to be auctioned off to raise funds for bushfire relief.

The autographed 1984 Los Angeles Olympic Games uniform was donated to the Lloyds Auctions Bushfire Relief Auction by a fan who had it in his possession.

Gaze led the senior Australian national team, the Boomers, to five Olympic Games, including as the flag bearer at the Opening Ceremony at Sydney 2000.

The 54-year-old is the latest Australian icon to have a special piece of kit auctioned to help victims of the bushfires.

At least 33 people have been killed, including four firefighters, and more than 11 million hectares of bush, forest and parks across Australia has burned.

It was bought by Australia's Commonwealth Bank, who plan to take it on a national tour to continue to raise money for communities affected by the bushfires, before it permanently resides in the Bradman Museum in Bowral in New South Wales.

"I don’t think Warney’s $1.1 million, or whatever he raised, is in jeopardy, but every little bit helps!" Gaze said.

"Ultimately, the most important thing is to help those that have been devasted by these horrific fires."

"Andrew Gaze is one of the most iconic basketball players in Australia and we are proud to be offering his signed uniform up for auction as part of our Bushfire Relief Auctions,” Lee Hames, chief operations officer of Lloyds Auctions, said.

“"For Australians when they think about the sport of Basketball, everyone remembers Andrew Gaze.

"We are eager to see how much this incredibly exciting piece of memorabilia might be able to raise, with 100 per cent of funds going to the Australian Red Cross.

"If you are a basketball fan, then jump online now to bid, the bidding has already been very active on this one and we don’t expect it to slow down anytime soon."