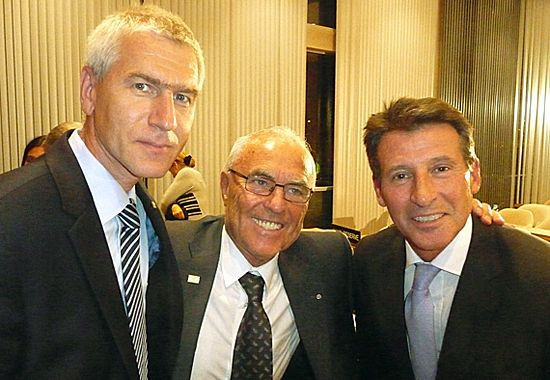 World Athletics President Sebastian Coe is to write to Russia's new Sports Minister Oleg Matytsin warning him that his country's athletes will not be allowed to compete at this year's Olympic Games in Tokyo unless its sport's leaders admit charges of breaking anti-doping rules.

Another key recommendation was that the suspension of the Authorised Neutral Athlete (ANA) process is maintained until charges against RusAF are fully investigated.

That would condemn Russia's top athletes to missing the Olympics for a second consecutive Games having also been banned - apart from long jumper Darya Klishina - from Rio 2016 following a suspension imposed in November 2015 after allegations of state-sponsored doping.

"If they maintain their current 'blanket denials' approach, we will put all necessary resource into presenting the charges to the CAS (Court of Arbitration for Sport)," World Athletics said in a statement.

"[The World Athletics] Council will not consider any applications for 'authorised neutral athlete' status in the meantime."

If, however, RusAF and its former President Dmitry Shlyakhtin admit the charges they have promised to introduce a new process to reintroduce the ANA scheme.

ANA was established by World Athletics as a category under which Russian athletes could compete at international competitions providing they could prove they had been regularly drugs-tested and had not been involved in the previous doping scandal.

Early signs, though, are not encouraging as RusAF continues to protest its innocence and complain about the time it has been given by the AIU to deal with the charges first tabled last November.

"RusAF disagrees with the accusations against it, brought forward by the AIU Council, as they are baseless and lack evidence," the national governing body said in a statement.

It also threatened that, "taking into account violations of the RusAF procedural rights, including by giving RusAF a very short period of time to respond to the charges that took AIU months to prepare" they were prepared to take legal action.

Russia's leading competitors have criticised the approach of RusAF.

"They completely deny everything, deny it rudely and with claims, thereby condemning us and you to the fact that we will be left without the Olympics, and without competition at all for the coming years," world pole vault champion Anzhelika Sidorova told Russia's official state news agency TASS.

"VFLA [Russian Athletics Federation] wake up, think at least a little before you publish your press releases.

"Too much depends on it -  the fate of all athletics in Russia depends, and now these are not just words - this is reality."

Sidorova was one of two Russian athletes who won gold medals at last year's World Championships in Doha competing under the ANA banner.

She claimed they had ignored appeals from her and other top Russian athletes to remove Shlyakhtin earlier.

Lasitskene demanded that Matytsin, appointed earlier this month to replace Kolobkov, arrange for the immediate removal of Shlyakhtin's replacement Yulia Tarasenko, widely seen as being an extension of the former regime.

"The letter that World Athletics will soon send to the new Minister of Sports Oleg Matytsin and [RusAF], and most importantly, the reaction to this letter, is the last chance to return Russian athletes to the international arena," she told TASS.

"It’s impossible to entrust this step to the current leaders of the Federation."