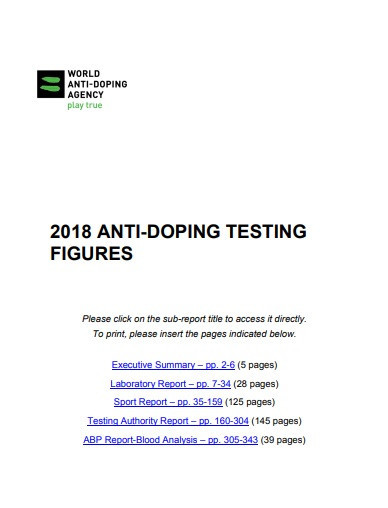 Italian athletes were responsible for comfortably the most confirmed anti-doping rule violations (ADRVs) in 2017, according to new statistics made public by the World Anti-Doping Agency (WADA).

Russia was fifth with 82 ADRVs, just behind Brazil on 84.

The most populous nations – China and India – were sixth and seventh respectively, with totals of 62 and 57.

Those figures take no account of the number of samples taken in each case, with some sports much more heavily tested than others.

The Italian tally was inflated by a particularly high number of non-analytical ADRVs, those which do not arise from detection of a prohibited substance or method in an athlete’s sample.

The statistics included 77 non-analytical ADRVs against Italian athletes, approaching half - 36 - in bodybuilding and a further 24 in cycling.

A footnote to a table on non-analytical ADRVs stated that among decisions rendered in 2017 but excluded from the table were "210 cases from Italy which involved people that are not a member of any sports federation or association".

Italy was also responsible for two of the 28 non-analytical ADRV cases committed by athlete support personnel – an important area given the high level of influence exerted by some entourage members and the inapplicability of traditional testing when it comes to catching them.

Five of these 28 cases were from Russia, with three each from China, France and Malaysia.

Olivier Niggli, WADA director general, said: "We are continuing to see the impact of intelligence-based testing, an area of increasing focus for the agency as we strengthen our investigations and intelligence-gathering capacity.

"Indeed, the number of ADRVs as a result of non-analytical violations increased by about 28 per cent between 2016 and 2017.”

Niggli continued: "While in- and out-of-competition testing remains critical to detect doping, events have recently shown that investigative work is becoming even more important.”

Among National Anti-Doping Agencies (NADOs), the French body (AFLD) generated the most ADRVs with 98; this was although five other NADOs took more samples.

Over a quarter - 28 per cent - were still pending.

Of the remainder, 10 per cent were dismissed because of a “valid medical reason”, presumably in most cases a therapeutic use exemption (TUE), five per cent were categorised as “no case to answer” and in four per cent the athlete was exonerated.