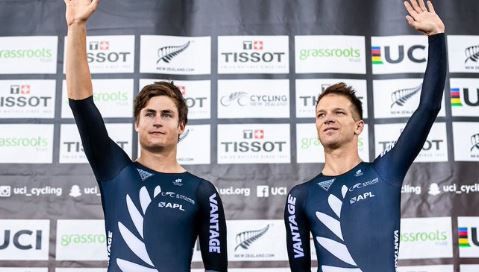 New Zealand riders topped the medal standings on the final day of the International Cycling Federation (UCI) Track World Cup on their home track at Cambridge.

The host nation finished with eight medals, and a win in the 50 kilometres Madison event by Campbell Stewart and Aaron Gate at the Avantidrome brought their total of golds to five - the most of any nation in the fourth of this season’s World Cup series.

Up against Australian rivals Kelland O'Brien and Cameron Meyer, the New Zealanders attacked early to put a lap on the field, before their rivals from across the Tasmann Sea responded to draw level as the pair lapped the field again, and then put the pressure on the hosts.

But Stewart and Gate - both omnium world champions - held on and then lapped the field for a fourth and final time.

The Kiwis' four laps on the field, as well as six sprint wins and points in 14 of the other 20 sprints meant they finished with 129 points, with Australia 42 points back, and Italy’s Michele Scartezzini and Francesco Lamon third on 57.

Home female rider Ellesse Andrews contributed to the gold medal total as she won the women’s Keirin in 11.251sec from Yuka Kobayashi of Japan and fellow New Zealander Olivia Podmore.

It was the only medal for New Zealand on the final night of the @trackworldcupnz but boy was it a goodie! Aaron Gate and Campbell Stewart put the world on notice with a dominant performance in the men’s Madison. ?: SWPIX pic.twitter.com/SqQVUUPAs2

Poland’s Mateusz Rudyk won the men’s sprint with a 2-0 victory over Japan’s Tomohiro Fukaya in the gold medal match.

The men’s scratch race was won by Ukraine’s Roman Gladysch from Roy Eefting of The Netherlands and Christos Volikakis of Greece.

Yumi Kajihara of Japan won the women’s omnium with 129 points, as Jennifer Valente of the United States took silver on 118 and the bronze went to Canada’s Alison B Beveridge on 111.

The UCI Track World Cup is now due to move on to Brisbane, where competition in the Australian city is due to take place from Friday to Saturday (December 13 to 15).