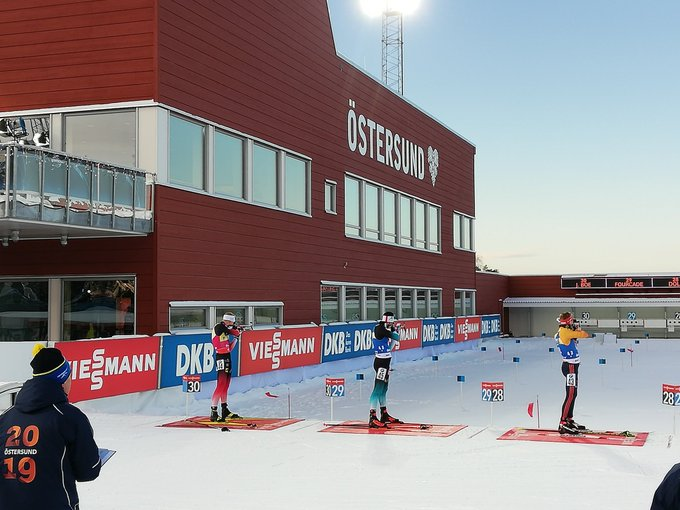 Johannes Thingnes Bø celebrated victory in the men’s sprint competition at the International Biathlon Union World Cup season ahead of his older brother Tarjei in Östersund.

Bø, the Olympic 20-kilometres champion, triumphed over half the distance at the Swedish venue.

The 26-year-old received one penalty in the first of the two shooting sections in the sprint event, but crucially shot clean in the second.

Bø’s skiing speed saw him pull clear of his rivals to take victory in a time of 24min 18.3sec.

It marked a perfect start to the season for Bø, who swept the World Cup standings in each of the five disciplines last year.

His brother Tarjei also ended the competition with one shooting penalty, crossing the line as the runner-up 19 seconds down.

Tarjei had emerged as the winner of a head-to-head battle with Russia’s Matvey Eliseev for second place.

Eliseev shot clean during the competition but ended just 0.9 seconds behind Tarjei Bø.

Congratulations to the top 3, Dorothea Wierer @Fisiofficial, Marte Olsbu Roeiseland @NSSF_Biathlon and Marketa Davidova of this women sprint from #OST19!
Don’t forget you can rewatch the entire competition on https://t.co/MSJYx30KUx pic.twitter.com/0g6KHN8TKX

The top three biathletes in the women’s 7.5 kilometre competition were separated by just 12 seconds.

Last year’s overall World Cup champion Dorothea Wierer emerged as the winner, with the Italian having been considered the pre-race favourite.

Wierer, who was second in the sprint standings behind the now retired Russian Anastasiya Kuzmina, received one penalty in the event.

Marte Olsbu Roeseland will rue the two prone shooting penalties she received, after the Norwegian finished 8.6 seconds behind the winner.