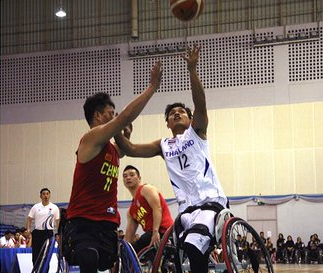 The men's match was the sole contest on the opening day of competition at the Eastern National Sports Centre.

A close contest between Thailand and China ended with the host nation securing a narrow 66-59 victory in IWBF Asia Oceania Championships Division A.

Australia, Iran, Japan and South Korea also feature in Division A, a single round-robin to determine first to sixth place in the rankings.

Australia play South Korea in their opening match tomorrow, with Iran set to take on China.

Thailand are aiming for a second successive victory when they face Japan, who are using the tournament as part of their preparations for next year's Paralympic Games.

Afghanistan, Chinese Taipei, Indonesia and Saudi Arabia are in Pool A, while India, Iraq, Malaysia and the Philippines are in Pool B.

They will also play in a single round-robin to determine placing, followed by crossovers, semi-finals and then a final to determine the top two teams in Division B.

Once Division B has concluded, the top-two teams will become the seventh- and eighth-ranked teams in Division A to make up the quarter-final pairings.

Australian Gliders 🇦🇺 play in the #2019AOZChamps under the new leadership of Head Coach Stephen Charlton.

Charlton has named a youthful side, with 4️⃣ players who will make their senior international debut. 🌏🏀🏆

Three places for women's teams are on offer for the Tokyo 2020 Paralympic Games.

The top three-ranked teams in the region - Australia, China, and Japan - will play a double round-robin in Division A to arrive at the first-to-third place ranking.

The five other sides - Afghanistan, Cambodia, India, Iran and Thailand - play in a round-robin in Division B.

The winner of Division B will then join Division A to be the fourth-ranked team to make up the semi-final pairings.

Matches in the women's competition start tomorrow, with Australia facing Japan in the top division.