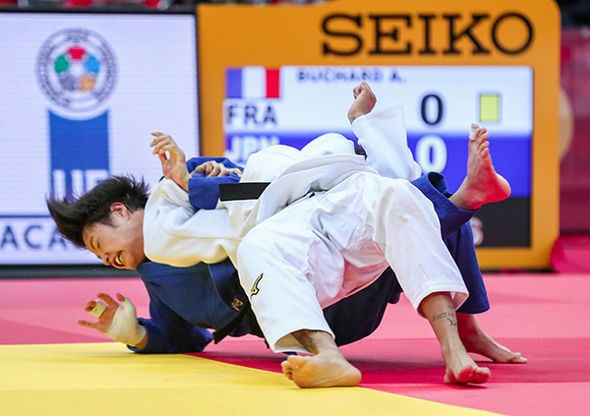 Abe had won 48 consecutive bouts since her last defeat on the IJF World Tour circuit back in 2016, but the run came to an end in the final of the women’s under-52 kilogram event at the Maruzen Intec Arena Osaka.

She met world number one Amandine Buchard of France in the gold medal bout, with the contest proving closely contest.

As well as ending her winning streak, the loss delayed Abe confirmation as Japan’s representative in the weight division at next year's Olympic Games in Tokyo.

Abe’s disappointment will have been eased by her brother’s success in the men’s under-66 kilogram competition.

With the All Japan Judo Federation High Performance Committee determining the all reigning world champions who claimed gold in Osaka would be selected for the Olympics, Abe had to beat his rival to keep his Tokyo 2020 hopes alive.

He rose to the challenge by beating Maruyama with a waza-ari score in the gold medal match to keep the Japanese selection alive.

Japanese judokas proved the dominant force on the first day in front of a home crowd.

He clinched victory in a golden score period.

Japan’s Funa Tonaki moved closer to clinching a place at Tokyo 2020 as the world number two topped the women’s under-48 kilogram podium.

A fourth gold medal in five divisions for the host nation was earned by Momo Tamaoki as the Japanese judoka overcame Chinese Taipei’s Lien Chen-Ling with an ippon score.

Mongolia’s Sumiya Dorjsuren and Canada’s Jessica Klimkait rounded off the podium places in the division.

The Grand Slam event is due to continue tomorrow, with four more weight divisions due to be contested.