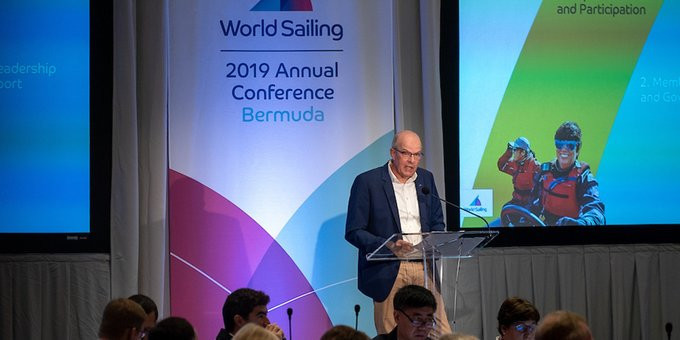 World Sailing is in the final stages of negotiating an overdraft facility to cover an expected cash fall in the middle of next year.

The loan is to be secured on the assets of the World Sailing Investment Trust.

As explained at the meeting, World Sailing has suffered both from lower-than-expected sponsorship income and a series of one-off costs during the present quadrennium running from 2017-20.

On the expense side, a move from the body’s long-time base in Southampton to London is said to have incurred relocation costs of £1.1 million ($1.4 million/€1.3 million).

An extensive package of governance reforms was rejected at the organisation’s Annual General Meeting on Sunday (November 3), dealing a significant blow to President Kim Andersen, who is up for re-election next year.

? The verdict on the @Paris2024 Windsurfer Equipment and the Governance Reform Proposal, as World Sailing's Annual Conference concluded in #Bermuda ?? with the AGM ✅

The improvement reflects a reduction in costs and a near doubling of sponsorship cash year-on-year.

Event income was also said to have held up well, reflecting sanction fees from a number of competitions, including the 36th America’s Cup, the sport’s pinnacle event, agreement for which was signed in Bermuda.

The forecast Olympic dividend of £12.24 million ($15.8 million/€14.2 million) accounts for some 47 per cent of expected quadrennial revenue.

The bulk of the sport’s Olympic money is expected to be received next September, and should hence resolve the cash flow problem that is prompting the temporary overdraft to be negotiated.

Hunt notified World Sailing’s Board of Directors that he would be taking on a new role in international sport next year.