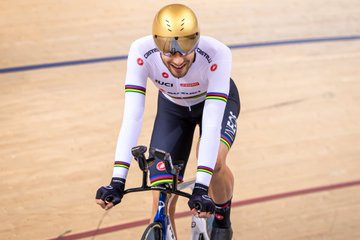 Filippo Ganna of Italy won the individual pursuit at the International Cycling Union Track Cycling World Cup in Minsk, breaking the world record in the process.

The recently-crowned world champion first broke the record in his qualifying round this morning, setting a time of 4min 04.252sec at the Minsk Arena Velodrome.

It was Lambie's record - 4:05.423 at the Pan American Championships in Bolivia in September - that Ganna broke, but it was the first world record set at sea level since Jack Bobridge of Australia managed 4:10.534 in Sydney in 2011.

Lasse Norman Hansen and Michael Mørkøv of Denmark were the winners in the men's madison, continuing their success in a season that has already seen them crowned European champions.

In second was Bryan Coquard and Benjamin Thomas of France and Albert Torres Barcelo and Sebastian Mora Vedri of Spain finished third.

Germany's Emma Hinze held onto an early lead in the women's keirin to take the gold medal, with Mathilde Gros of France pipping Lee Hye-jin of South Korea to silver in a photo finish.

Jennifer Valente of the US was the winner in the women's omnium, finishing first, first and third before impressing in the points race to triumph.

Letizia Paternoster of Italy was the silver medallist, while Laura Kenny of British Olympic champion Laura Kenny had to make do with bronze.

A Dutch clean sweep concluded the World Cup event in Minsk, with Harrie Lavreysen earning his second gold medal of the competition after the keirin yesterday.

He was the clear victor against compatriot Jeffrey Hoogland in the men's sprint final, while Matthijs Büchli finished third.