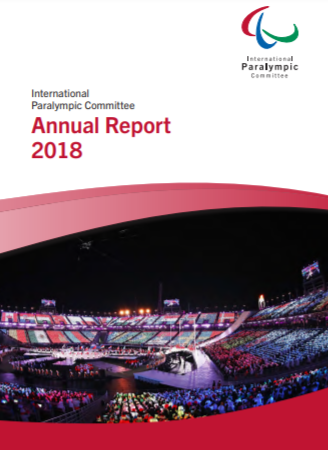 The International Paralympic Committee (IPC) has boasted revenue growth, but increased expenditure, in its newly-published annual report for 2018.

The IPC’s workforce - covering core departments, World Para Sports and the Agitos Foundation – grew from 89 to 118 full and part-time members of staff.

The publication of the annual report, accessible here, comes ahead of the 19th IPC General Assembly, due to take place in the organisation’s home city of Bonn in Germany on October 26 and 27.

The report marks the first full year in office for IPC President Andrew Parsons and key highlights pinpointed from 2018 included the signing of a long-term partnership agreement with the International Olympic Committee (IOC) which provides "greater stability and cooperation".

Among the others were a "record-breaking" Winter Paralympic Games in Pyeongchang last year, with more athletes, countries, spectators and media than ever before, and an IPC membership gathering in Madrid that brought together more than 200 stakeholders.

The launch of the IPC’s first governance review since 2004 and the Agitos Foundation's activities "benefiting more than 100 IPC members around the world" were also underlined.

"In a year of many highlights, the stand-out has to be signing the new partnership agreement with my IOC counterpart President (Thomas) Bach," Parsons said.

"When I was elected IPC President, my number one priority was to strengthen the IPC’s relationship with the IOC and secure the future of the IPC and the Paralympic Movement.

The Brazilian added: "Ahead of the [Winter Paralympic] Games, more commercial partners than ever before undertook promotional activities, while in Pyeongchang the athletes' performances were absolutely mind-blowing and were broadcast to more countries than ever before.

"As an organisation, the IPC started to make several changes in 2018.

"We became a more membership-focused organisation, we launched our first governance review since 2004 and work continued apace on the development of the IPC strategic plan 2019-2022 and the first IPC Athletes' Council strategy.

"All such activities aim to maintain the IPC’s position as a world-leading sports organisation with strong athlete representation and voice throughout."

Parsons went on to state that the Agitos Foundation had continued its "magnificent efforts" to develop Para-sport around the world, supporting more than 100 IPC members.

A total of 51 athletes from 21 countries – plus several coaches, sport managers and officials – all benefited from the Agitos Foundation's workshops in the lead-up to Pyeongchang 2018.

"All of our work has a profound transformational societal impact and it is vital that we make more of this in order to drive the human rights agenda and empower the world’s one billion persons with disabilities," Parsons added.

"Going forward, you will see the IPC undertaking more efforts to showcase how we make for a more inclusive world through Para-sport by advancing the UN (United Nations) Convention on the Rights of Persons with Disabilities and the Sustainable Development Goals.

"Working together with our members and key stakeholders, I’m confident we can change the stigma around disability by engaging greater audiences and highlighting how we celebrate diversity and transform global attitudes towards disability."

Last month, Parsons vowed the IPC will aim to have a greater impact on the lives of disabled people in wider society as it celebrated its 30th anniversary.

The IPC was formed on September 22, 1989 in German city Düsseldorf.

Parsons marked the anniversary with an open letter on the official Paralympic website, in which he thanked the efforts of all involved in the history of the IPC, including his predecessors, Robert Steadward and Sir Philip Craven.