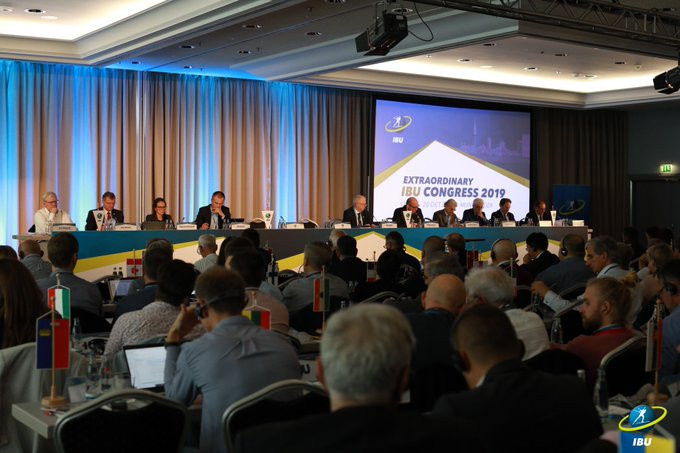 The International Biathlon Union (IBU) has established a Biathlon Integrity Unit (BIU) and introduced three-term limits for the President and Executive Board, after its new constitution was passed at an Extraordinary Congress in Munich today.

Members of the IBU voted unanimously in favour of the new constitution, replacing a document those within the organisation felt was considerably out of date.

Creating the BIU, which will be independent of the worldwide governing body, is among the headline elements of the updated constitution.

The BIU will manage all integrity related matters concerning biathlon, including anti-doping, ethical breaches, betting-related issues and any other kind of result manipulation.

It mirrors the Athletics Integrity Unit model, set up by the International Association of Athletics Federations in 2017.

A new integrity code is also part of the constitution, which the IBU claim "strengthens the current ethics code and adds safeguarding rules, rules against competition manipulation and rules for candidates for IBU office and bidders".

Members voted to introduce three-term limits for the President and Executive Board, meaning high-ranking officials can only serve in their role for a maximum 12 years.

All those elected, appointed or nominated as IBU staff, as members of the IBU Executive Board or an IBU Committee, will also have to be subjected to a "stringent" vetting process before they take up the position under the new constitution.

The Congress has adopted the motion of the Executive Board to approve a new 2019 Constitution in place of the current Constitution.

Another key change will see the Executive Board suggest hosts of World Championships to Congress after an evaluation of candidates.

The document also means the IBU will have to make public all future minutes from Congress and Executive Board meetings, while a minimum of two women must feature on the Executive Board, Technical and Athletes Committee.

Changing the constitution has been a key aim of Olle Dahlin since he was elected IBU President in September 2018.

Besseberg and former secretary general Nicole Resch, who deny wrongdoing, are the subject of a criminal investigation focused on doping, fraud and corruption.

"Over the last 12 months we have spoken a lot about change," said Dahlin.

"We have spoken about the urgent need for change to ensure our athletes and all our stakeholders are protected.

"We have spoken about how we must change to protect our integrity and build trust.

"While we have made many changes along the way, today is the day that that change becomes a reality.

"With the approval of our new Constitution, aligned with international best practice, we have entered a new era for biathlon.

"There is no turning back - transparency and integrity must be at the heart of everything we do."