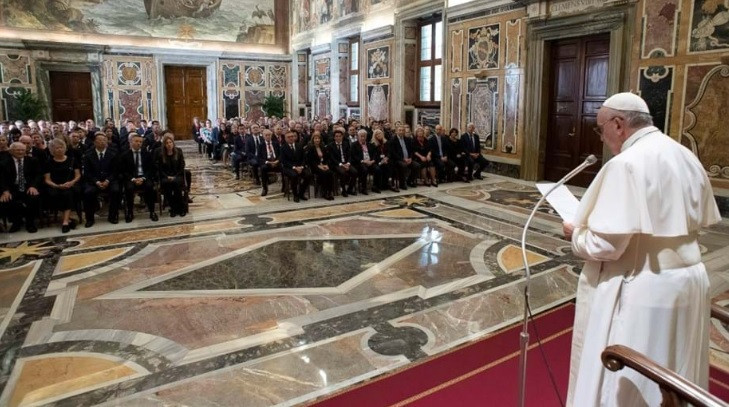 Members of the International Ice Hockey Federation (IIHF) have been given an audience with Pope Francis at the Vatican.

IIHF President René Fasel, along with 180 guests attended the Vatican, the headquarters of the Roman Catholic Church.

Pope Francis addressed the attendees at the ceremony, while Fasel, whose term as IIHF President will come to an end next year, also gave a speech.

"Hockey is a good example of how sport can express a sense of community," Pope Francis said.

"It is a team game in which each team member has an important role to play.

"Whenever you take part in the World Championships, you can see how people from many different countries enjoy coming together to experience the beauty of sport.

"As you support the development of this sport worldwide, you are encouraging young and old, men and women, to bring out the best of themselves and to promote friendly relationships on the ice.”

Fasel thanked Pope Francis for granting the IIHF an audience at the Vatican and claimed ice hockey is a sport which "brings people together".

The 69-year-old Swiss, who presented the Pope with a series of gifts at the meeting, cited the joint North and South Korean ice hockey team at last year's Winter Olympic Games in Pyeongchang as an example.

"It took several years of discussions and preparations, but in the end the players from North and South Korea were together on the same team, in the same dressing room, wearing the same jersey, playing together on the ice for each other and the Korean people," Fasel said.

"It is this spirit that we share across the world of sport.

"We work hard for each other, and this is why I refer to our Congress members as the ice hockey family."