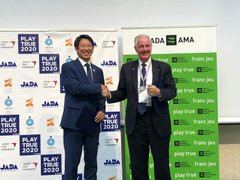 An agreement has been signed by the World Anti-Doping Agency (WADA) and the Japanese Government to continue the country's support for the regional umbrella organisation in Asia.

The deal was penned by WADA President Sir Craig Reedie and Daichi Suzuki, commissioner of the Japan Sports Agency, during a two-day anti-doping seminar in Tokyo.

It will see Japan continue to inject funds into the five Regional Anti-Doping Organisations (RADOs) in Asia, which work in 36 countries, for at least the next 12 months.

"This close cooperation between Japan, WADA and the RADOs has borne fruit over the years, particularly as it relates to building anti-doping capacity," Sir Craig, whose term as WADA President concludes on January 1, said.

"This has led to the RADOs establishing positive reputations and strengthening the overall programme throughout the region."

Suzuki revealed the country was developing several anti-doping initiatives in the build-up to next year's Olympic and Paralympic Games in Tokyo.

"We are accelerating promotion of training of doping control officers, enhancement of laboratory and investigation and intelligence programmes in cooperation with the Tokyo 2020 Organising Committee, the Japan Sport Council and Japan Anti-Doping Agency (JADA) for doping-free Games in Tokyo 2020," Suzuki, the 1988 Olympic 100 metres backstroke gold medallist, said.

WADA also signed a deal with pharmaceutical company Kyowa Kirin during the visit to the Japanese capital.

It will ensure WADA is immediately informed by Kyowa Kirin of "any new compounds or substances in development that have the potential for sports-related abuse".

Sir Craig, set to succeeded as President by Poland's Witold Bańka, was presented with the JADA's highest award - the Fairness Crystal Award - for his "longstanding commitment to protecting clean sport around the world".

The Briton, President since 2014, has been at the helm during the most tumultuous period in the organisation's history following the Russian doping scandal.