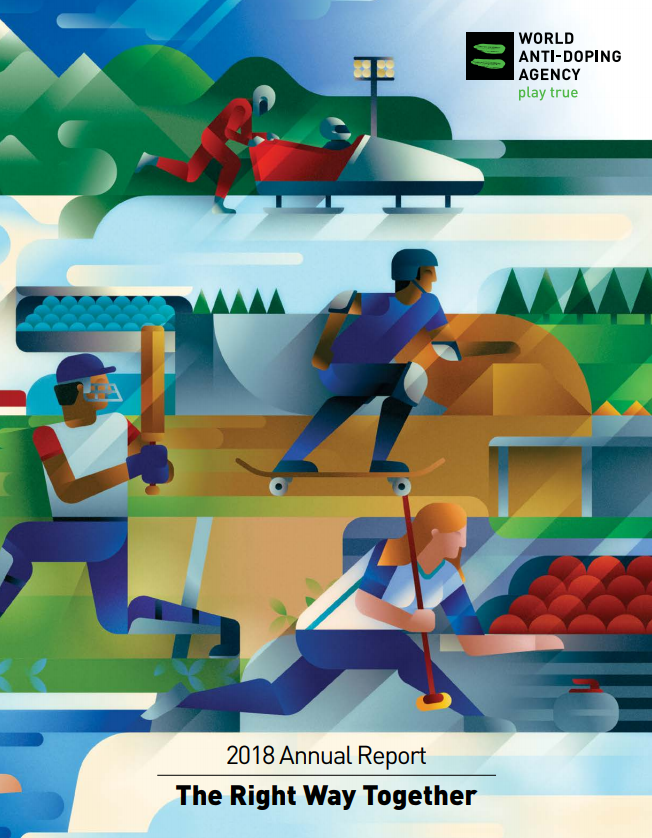 World Anti-Doping Agency (WADA) President Sir Craig Reedie and director general Olivier Niggli have claimed 2018 will be remembered as the "breakthrough year" for the organisation's response to the Russian doping crisis.

The declaration was made in their joint opening message to WADA's 2018 annual report, titled "The Right Way Forward".

Sir Craig and Niggli insisted progress made in the Russian doping crisis, which the organisation say consumed much of their time and energy since 2015, justified the WADA Executive Committee's decision in September 2018.

They made the controversial move to reinstate the Russian Anti-Doping Agency (RUSADA) on the condition access was provided to the infamous Moscow Laboratory.

"Many months into 2019, we can see that, while we still have a distance to travel, 2018 is likely to be remembered as the breakthrough year for WADA's response," the joint message read.

"After a lengthy impasse with Russian authorities, in September 2018, WADA's Executive Committee (ExCo) took the bold decision to reinstate the RUSADA as compliant with the World Anti-Doping Code under strict conditions that, if met, would allow the Agency to gain access to the Moscow Laboratory.

"Since that ExCo decision, WADA Intelligence and Investigations (I&I) carried out two successful missions to Russia in January and April 2019 to retrieve a copy of the Laboratory Information Management System (LIMS), associated raw data and samples from the Laboratory.

"While WADA I&I continues to validate the data, it has also begun compiling strong evidence against those who are believed to have cheated; and, has started providing batches of cases to International Federations (IFs).

"This significant progress would not have been made without the ExCo decision – time has shown it was the right one for the good of athletes and clean sport."

Russia missed the deadline of December 31 to grant access to the samples and information stored at the infamous laboratory in the Russian capital, but WADA was able to extract the data 10 days later.

It meant RUSADA avoided any further sanction, although the decision from WADA not to punish Russia was criticised by largely Western National Anti-Doping Organisations and athletes.

WADA said in June that 298 athletes had been identified as having the most suspicious samples in data retrieved from the Moscow Laboratory, with evidentiary packages on 43 competitors to the relevant International Federations (IFs)

The IFs are expected to assess the evidence with a view to identifying cases to take forward as anti-doping rule violations.

It has been estimated by WADA that, by the end of 2019, all priority cases will have been investigated by the organisation and handed to IFs to follow up.

The WADA report adds that in cases where an IF chooses not to act, the organisation will review and discuss the facts with the governing body involved.

Cases could be brought forward to the Court of Arbitration for Sport (CAS) by WADA.

Decisions made by the respective IFs and CAS will be monitored by WADA, with the organisation saying they will adjust its strategy accordingly.

Sir Craig and Niggli say the annual report demonstrates how WADA is performing against their vision and 11 key strategic priorities.

The organisation will undergo change in coming months, with Sir Craig set to be succeeded by Poland's Witold Bańka as WADA President at the World Conference on Doping in Sport in Poland in November.

Double Olympic short track speed skating gold medallist Yang Yang is set to become vice-president, after she was nominated as the Olympic Movement representative for the position.

"In November, the approval by the Foundation Board (Board) of a raft of wide-ranging governance reforms will make WADA more independent and more representative of our stakeholders, for the good of clean sport around the world," the joint message reads.

"Helping fund WADA's increased activities, in November 2017 and May 2018 the Board approved increases to the Agency's 2017 budget by eight per cent each year between 2018 and 2022.

"This commitment demonstrates the importance of WADA's mission and the faith that the Board maintains in its management.

"Working with and listening to all our stakeholders in every aspect of the Agency's mandate remains the defining constant that leads to our progress.

"This report is a snapshot of WADA's collaborative achievements alongside its partners to strengthen clean sport around the world.

"We acknowledge and thank the 158 volunteers, which make up WADA's Board, ExCo, Standing Committees, Ethics Panel, and Expert and Advisory Groups.

"Like most sporting bodies, our talented and dedicated volunteers are the backbone of the Agency.

"Without their engagement, time and expertise, the Agency and clean sport would simply not advance."