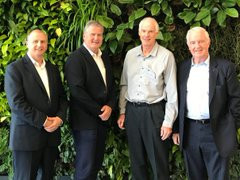 Institute of National Anti-Doping Organisations (iNADO) chairman Michael Ask has claimed the World Anti-Doping Agency (WADA) was right to reinstate Russia but criticised its failure to explain the reasons why it was more important to gain access to the Moscow Laboratory than "an official apology from Vladimir Putin".

Ask, elected iNADO chairman in April, admitted WADA was correct to lift the suspension on the Russian Anti-Doping Agency (RUSADA) subject to the organisation fulfilling two criteria on access to data and information at the laboratory in the Russian capital and re-analysis of samples required by WADA.

The compromise WADA reached with RUSADA was the focus of prolonged criticism, largely from anti-doping groups such as the iNADO.

The comments from the Dane in an interview with Play the Game represent a considerable u-turn as the iNADO was one of the most vocal organisations against the reinstatement of RUSADA.

In a statement before the WADA Executive Committee decision in September, the iNADO urged the body not to "pander to the will of a powerful nation" and expressed "dismay" at the agreement which saw Russia welcomed back into the sporting fold.

Almost a year on, the iNADO view has shifted from one of opposition of support after WADA gained access to the laboratory and retrieved over 2,200 samples from the facility.

WADA announced last month that it had identified a pool of nearly 300 athletes with the most suspicious samples and revealed 43 evidentiary packages had been sent to the relevant International Federations, which are tasked with sanctioning or clearing Russian competitors involved in the state-sponsored doping scheme.

"WADA must be praised for getting access to the lab in Moscow and at last securing the Russian doping samples," Ask told Play the Game.

"It is no secret that we had different opinions - also among the national anti-doping agencies – on whether it was the right step at the right moment or not.

"But the controversy was in my eyes grounded in a lack of communication from WADA about the move more than in the tactical move itself.

"WADA should have done more to explain why it was more important to get access to the lab than getting an official Russian apology from Putin.

"That will never happen.

"We all know that.

"It is easy to be wise in hindsight.

"But we can all learn from the Russian case and today I believe that WADA did the right thing under the circumstances."

The iNADO and WADA reaffirmed their cooperation at a meeting in June, marking the latest example of a softening of the tensions between largely Western NADOs, the iNADO and the global body.

While Ask was full of praise for the way WADA had secured the samples, the former detective chief superintendent and head of department with the Danish police added his voice to those who have criticised the lack of independence at WADA and the Court of Arbitration for Sport (CAS).

The Danish official admitted, however, that he was uncertain as to how to implement a more independent structure at both organisations.

"Today, neither WADA nor CAS is independent," he said.

"We should clearly look into how we in the future can make the two institutions independent of both interests in sports organisations and political interests.

"I don’t know how to do it in practice.

"But as in the rest of society the world of sport should surely apply some mechanisms which can separate the legislative power, the executive power and the judicial power.

"Sport should still be allowed to organise as it pleases.

"But when we talk about elite sport, with the many national and economic interests that are at stake in sport at this level, it makes good sense to me if WADA and CAS were independent from both the sports organisations and the political elected Governments.

"I am talking about a separation of powers which all democratic countries endeavour."