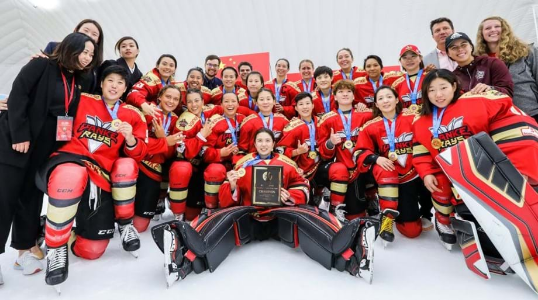 The newly appointed head coach of the team formed to help develop Chinese ice hockey talent prior to the Beijing 2022 Winter Olympic Games is relishing the challenge.

Brian Idalski, best known for his long association with North Dakota Fighting Hawks in the National Collegiate Athletic Association, took over the head coach role in June for his first position outside of North America.

It comes on the back of the team winning a pre-season tournament in Beijing, where current Russian champions Agidel Ufa and a Chinese national roster were among those competing.

China has little ice hockey pedigree, but is keen to change that before staging the Winter Olympics in three years.

Kunlun Red Star, which rebranded as Shenzhen KRS Vanke Rays last season and finished fifth in the six-team CWHL, were formed in 2016 with this in mind.

It was a big attraction for Idalski.

"When I hear an organisation talk about successful and doing things the right way, that’s a resounding 'yes' with me."

He added: "When we talk about building something, leaving a mark, being part of something special, that's all a resounding 'yes' with me as well.

"It was a very easy decision for me once we sat down and had a conversation face to face."

It is claimed that a desire to do more than merely play the game is also motivating the players Idalski and the Vanke Rays want to bring to China.

For North Americans with Chinese heritage, a possible Olympic call-up could be a tempting prospect, but Idalski stresses the bigger picture.

"I think all human beings have a drive to be part of something special," Idalski added.

"For female hockey players, this is a chance to come over and make an impact.

"It’s attractive for any number of players and I think our female players really embrace that."

It is thought, therefore, that it could be the ideal testing ground for China’s potential Olympic stars.