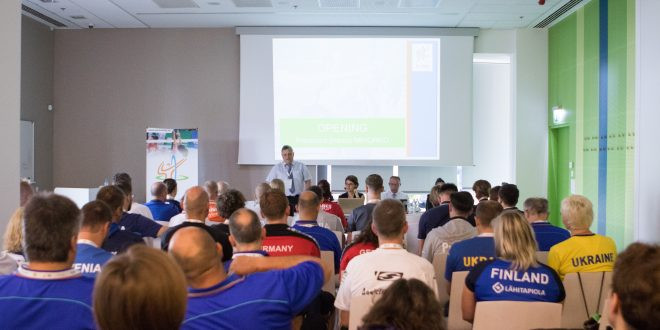 ParaVolley Europe (PVE) President Branko Mihorko has elaborated on plans to widen the base of participation and expand activities throughout the continent at the organisation’s General Assembly in Budapest.

The Slovenian spoke about the vision for the further development of mini volley, the permanent inclusion of sitting volleyball in multi-sport competitions of the European Paralympic Movement and the introduction of official club competitions.

He also stressed the importance of getting more people from more countries involved in the sport and highlighted the introduction of new technologies, with an emphasis on digital collaboration and online distribution of information in an effort to increase transparency and reduce workloads and paperwork for all concerned.

The General Assembly, which featured 19 nations with voting rights, also saw the re-election of The Netherlands' Paul Harmsen as vice-president.

In addition, there was the approval of Croatia’s Zdravko Hranic as sports director, Italy’s Guido Pasciari as marketing director and France’s Isabelle Collot as communications director, while Latvia’s Una Dzalba was elected for the first time as development director.

Amid a series of gatherings in Hungary's capital, where the 2019 European Sitting Volleyball Championships took place from July 13 to 21, bids were presented by Czech Republic, Serbia and Turkey for the 2021 and 2023 Division A European Championships.

Czech Republic is proposing a split event for the 2021 edition, separating the genders, while Serbia and Turkey are offering combined events to be held in May and June.

Mihorko, meanwhile, confirmed the 2020 Division B European Championships are to be held in Slovenia with the organisational support of the Spodnja Savinjska Sempeter volleyball club.

Taking place in parallel with that will be a Women’s Sitting Volleyball Open and a "New Nations" event, including countries participating in the Invictus Games.

Other side events will include communications and marketing workshops.

Ormindelli will coordinate activities of PVE member nation coaches and help launch and supervise a digital platform as a tool for coaches' communication and exchanging of ideas.

He will also aid the implementation of the coaches' education programmes currently being considered by PVE.

Coaches of the participating countries at the 2019 European Sitting Volley Championships took part in meeting hosted by the PVE Executive Board to stress the points and main discrepancies between national teams.

It is hoped that this will show the way forward for the development of the sport.

Players competing at the continental event elaborated on ways to improve the classification system at an open meeting of the PVE Athletes' Commission.

Athletes' Commission members Ivan Cosic of Croatia, Tatiana Ivanova of Russia and Jana Ferjan of Slovenia discussed proposals with representatives of all the teams.

The players agreed that a more transparent classification system is necessary for future competitions and that any new rules and regulations should be made known to teams at least two months in advance of their implementation, including videos of correct and incorrect plays.

More specifically, concerning classification, players proposed a change of rules to allow two players classified as being of "minimal impairment" on the court.