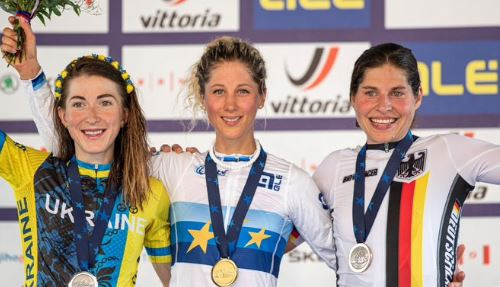 The 26-year-old Swiss finished in 1hr 30min 8sec, almost three minutes clear of a talented field of whom Ukraine’s 2017 champion, Yana Belomoina, was the closest challenger, taking silver in 1:33.00.

Bronze went to Germany’s Elizabeth Brandau in 1:33.13, with Anne Terpstra of the Netherlands taking fourth place in 1:33:28 ahead of Poland’s former world champion and Olympic medallist Maja Włoszczowska.

Silver went to Florian Vogel of Switzerland on 1:29:17 and bronze to Milan Vader of the Netherlands, who clocked 1:29:36.

Switzerland’s European champion Lars Forster was 11th in 1:30:58 and Gerard Kershbaumer, Italy’s silver medallist at the 2018 World Championships, was back in 16th place in 1:31:29.