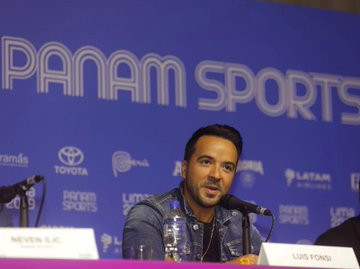 Star singer Luis Fonsi has claimed he is is "honoured" to be featuring in the Pan American Games Opening Ceremony here, but declined to reveal details about his performance.

It was announced last month that Fonsi, a five-times Latin Grammy Award winning singer-songwriter, producer and musician, would perform at the Lima 2019 Opening Ceremony.

The Puerto Rican is known worldwide for his song Despacito, released in 2017.

The official music video for Despacito is the most-viewed Youtube video of all time, with 6.25 billion views.

Fonsi told a packed press conference room today of his delight at being involved in the Pan American Games.

"It is great to be part of such a great event," he said.

"I am very honoured to be next to great local artists who will also be performing.

"I am a sports fan and for me music and sports really mingle, I think we have something really beautiful prepared for Friday.

"I want to give you more details but I also want to surprise you, it’s going to be a very special and magical night, just like it should be.

"I think it’s a privilege to be a part of this Games."

"The Opening Ceremony will involve Peruvian artists and culture but we wanted to give it an international touch," said Ilic.

"We thought, who is recognised and admired in the 41 countries competing.

"We decided on Luis Fonsi, it is important for us that he is with us."

Fonsi is due to be joined at the Opening Ceremony by Peruvian opera star Juan Diego Flórez, with traditional Peruvian music, fireworks and a parade of nations also set to feature.

The team devising the event is being led by the experienced Francisco Negrin and will be produced by Italian company Balich Worldwide Shows.

The Ceremony is scheduled to take place on Friday (July 26) at Estadio Nacional.