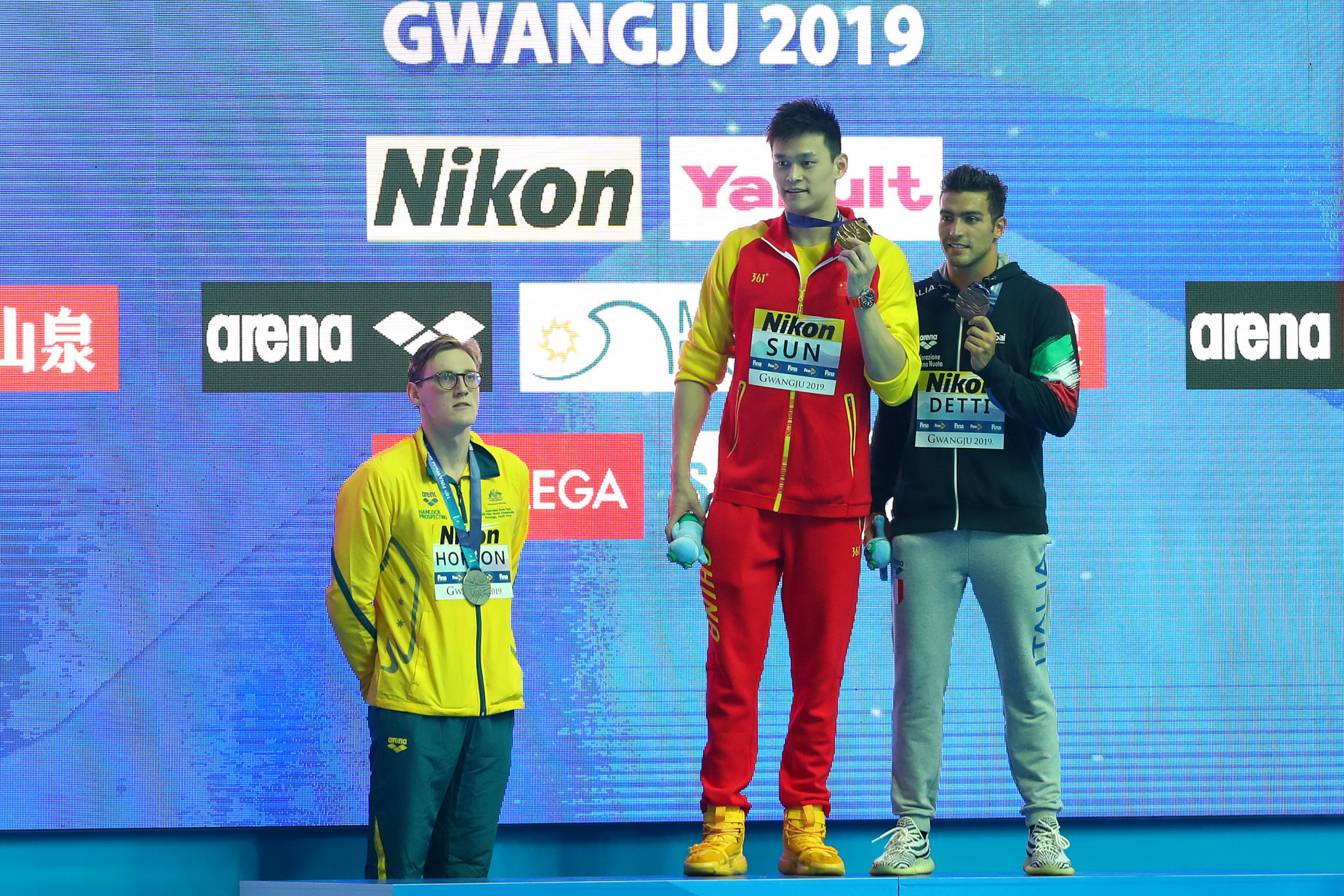 Mack Horton refused to step onto the medal podium on the first night of swimming at the World Aquatics Championships as his rivalry with controversial Chinese swimmer Sun Yang took another twist here in Gwangju.

Sun got the better of Horton in the men's 400m freestyle final to the delight of a large Chinese contingent in the stands, with the Australian cutting a frustrated figure after being pushed into second.

Chinese swimmer Sun was accused of deliberately smashing his blood sample in a row with drugs testers earlier this year but avoided punishment from the International Swimming Federation (FINA) and its doping panel, instead receiving a warning.

His permitted entry to the World Championships has been heavily criticised by his rivals, with Horton one of the most outspoken.

After the race, Horton said: "I think you know how I feel.

"I think you all know what the rivalry is like.

"His actions, and how it's been handled, speak louder than anything I’ll have to say."

Horton returned to the arena to collect his silver medal but refused to climb onto the podium next to Sun, instead receiving his medal on the ground.

Gabriele Detti of Italy completed the podium in 3:43.23.

Five-times Olympic champion Ledecky failed to win a world final for just the second time in her career as 18-year-old Titmus stormed past her in the closing stages.

World Record - Adam Peaty lowered his own WR in the Men’s 100m Breaststroke Semi Final to 56.88! All the action live on 💻 https://t.co/bEozhdW5qV #FINAGwangju2019 #Swimming #FINA pic.twitter.com/iFdXAweCwb

"I knew I had to take it out hard to be with her and her third hundred is still better than mine.

"I saw her move and I thought to myself 'hang in there, she’s going to have more and you’re not going to get her', but suddenly I found something and it feels good."

After his heat this morning, Peaty told insidethegames he was not going to hunt the record anymore, but instead let it come naturally.

Just a few hours later the Briton was beaming and wants to go faster again in tomorrow's final.

"It is incredible," said Peaty.

"I've been chasing it for three years now, ever since I touched the wall in Rio I knew I could go faster.

"It always comes down to where and when you do it, though.

In the men's water polo crossover matches, Australia needed a shootout to see off Montenegro to reach the last eight.

The match was tied at 9-9 before the Australians recorded a 13-11 victory.

Greece won their last quarter 3-1 as they defeated the United States 11-9 to progress to the quarter-finals.

Spain won 15-7 against Japan and Germany crushed South Africa 25-5 in sealing their passage to the next round.

They will take on Brazil after they overcame New Zealand 12-8.