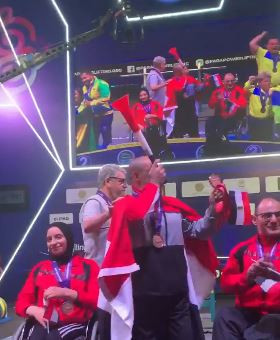 In the final against Brazil, Osman lifted an impressive 185 kilograms after two-times world champion Rehab Ahmed had opened with a 100kg lift.

Mohamed Elelfat later cleared the bar at 200kg for a total of 473.17 points to take gold.

Brazil only managed one successful lift through Mariana D’Andrea, who pushed 100kg, to finish with 94.04 points.

Results were calculated using the AH (Haleczko) Formula, a coefficient that enables the comparison of the results of lifters from different bodyweight categories.

“It was an interesting event, and I am very happy to help Egypt get the gold,” said Osman, who days before had claimed the Nur-Sultan 2019 individual gold in the men’s under-59kg class.

Despite losing the final, Brazilian Bruno Carra departed happy to have competed in the first mixed team event.

“This new event gave us an extra opportunity to perform.

“This kind of event also unites the teams and we play for a common objective.

“I hope in the next few years we have more teams participating.”

In the overall Nur-Sultan 2019 standings, China finished first with 16 medals, including seven golds, eight silvers and one bronze.

A total of five world and 25 regional records were set throughout the World Championships.

The next stop in the Para powerlifting calendar will be the Lima 2019 Parapan American Games from August 23 to September 1.