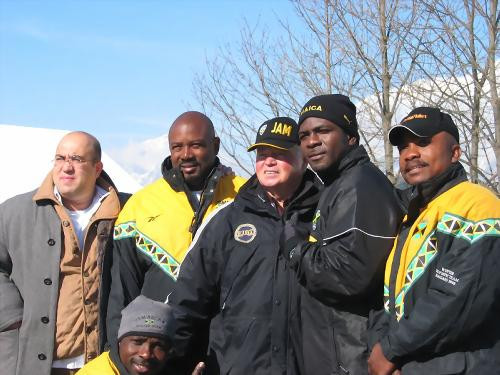 The Austrian who helped coach Jamaica's first Olympic bobsleigh team has died at the age of 78, it has been announced.

Sepp Haidacher met Jamaica's fledgling four-man team of Dudley Stokes, Devon Harris, Michael White and Casewell Allen shortly after the team's formation at one of the bobsleigh schools he used to run at Igls in Austria.

He worked the team during the build-up to the 1988 Winter Olympics in Calgary and helped reach an agreement with the Fédération Internationale de Bobsleigh et de Tobogganing – the forerunner to the International Bobsleigh and Skeleton Federation (IBSF) – to allow them to take part in the two and four-man events at the Games.

The novelty of having a bobsleigh team from the Caribbean was, of course, later immortalised in the hit Hollywood film Cool Runnings.

John Candy played the role of the coach in the film and portrays Irv Blitzer, a fictional character who used to be one of the United States' top bobsledders before retiring to Jamaica in disgrace after being caught cheating.

In reality, Haidacher was a hugely respected figure in the sport and renowned for nuturing and encouraging young bobsleigh talent.

He had been captain of Austria's bobsleigh team at the 1984 Winter Olympic Games in Sarajevo and worked with the team from Taiwan before coaching Jamaica.

His arrangement with Jamaica was formalised in 1989 following Calgary and he continued to work on the development of the sport in the country.

Haidacher has been called the "Godfather" of Jamaica bobsleigh.

"It would be hard to find anyone who more profoundly impacted the survival and successes of the Jamaica bobsleigh programme," Chris Stokes, a late call-up for the team at Calgary 1988 following an injury to Allen and now President of the Jamaica Bobsleigh and Skeleton Federation, said following news of Haidacher's death.

"He was to so many of us coach, father and friend.

"Even with his health problems in later years, he remained the spiritual centre of Jamaica bobsleigh, so much so that before competing in the 2018 Winter [Olympic] Games, legendary bobsledder Dudley Stokes took female pilot Jazmine Fenlator to meet him show respect and gratitude.

"He will be missed.

"Our thoughts and prayers are with his wife Aunty Maria."

"His instinctive feeling, care and patience in leading the Europe Cup series prepared our young athletes for their career in the FIBT/IBSF," Ferriani said.

"Our thoughts are with his wife Maria and his family.

"We will honour his memory in the IBSF family."

Haidacher, who died on July 10, is due to be buried in Voldöpp on Wednesday (July 17).