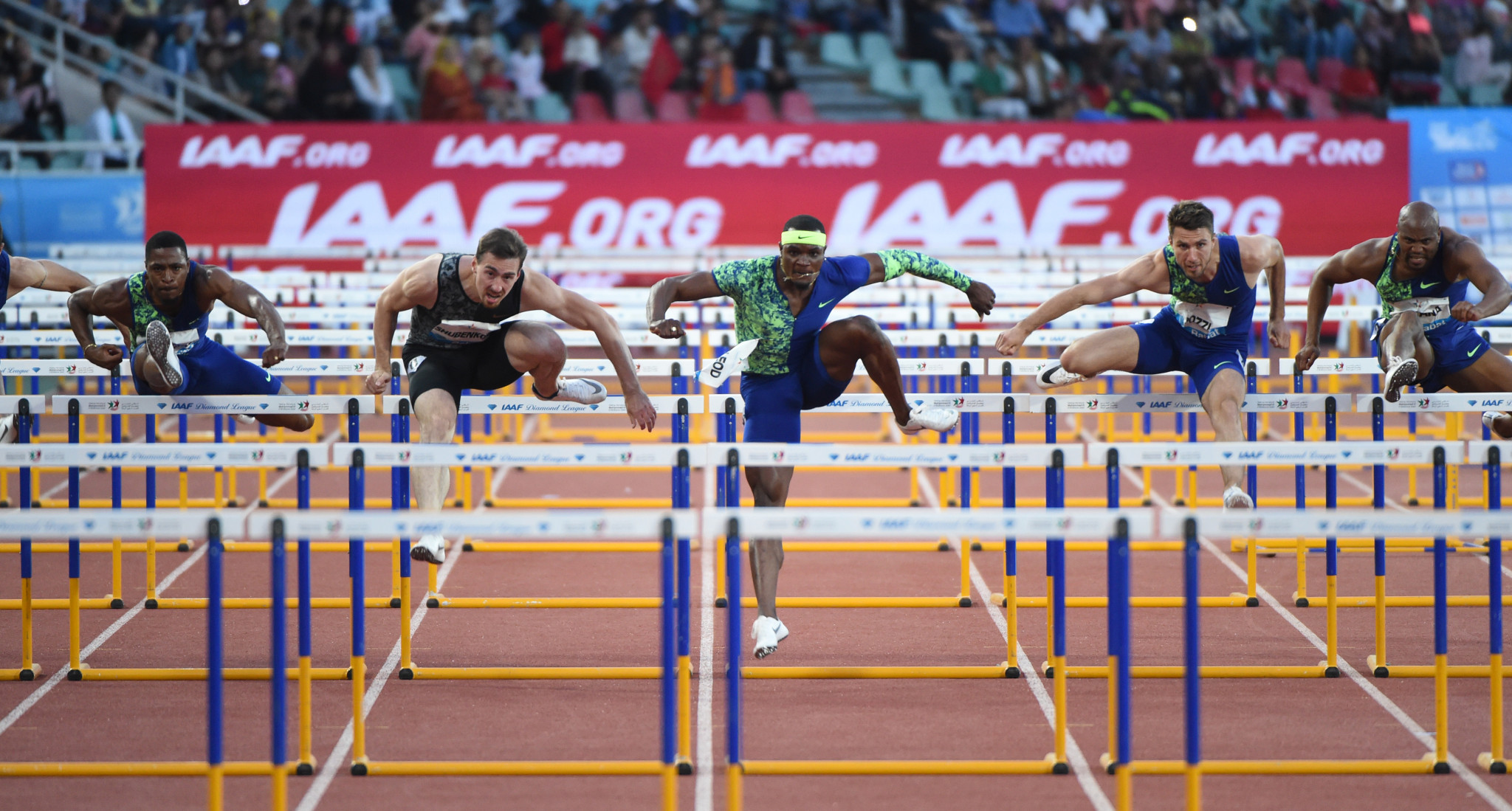 Sergey Shubenkov genuinely scraped a victory here in the Moroccan capital as he slid painfully across the line after being tripped in the final steps of the men’s 110 metres hurdles by his falling rival Omar McLeod.

And there was plenty of other drama in the sixth of this season’s International Association of Athletics Federations Diamond League meetings.

Jamaica's discus thrower Fedrick Dacres ended the night with a Diamond League record and 2019 world lead of 70.78 metres after appealing successfully against the ruling that the throw was a foul, and world long jump champion Luvo Manyonga was carried from the arena on a stretcher after injuring his ankle while leading.

Daniel Stahl, who had headed this year’s men's discus rankings with 70.56m, appeared to have earned victory in a meeting record of 69.94m, just 44cm clear of what was a season’s best by Dacres.

But the reappraisal of Dacres’ third effort meant the Swede had to settle for second place, with Lukas Weisshaidinger of Austria third on 68.14 – also a season’s best.

But the Siberian, competing as an Authorised Neutral Athlete, was left with a skinned right shoulder and scrapes to both knees and hands after being caught as he overtook McLeod in the final couple of metres, with the Jamaican finishing a disappointed fifth.

“It was a dramatic race, but a really great race,” said Shubenkov.

“And I was able to win – that’s very important.

"I am feeling stronger than before.

"Having Omar in the field gave me an extra motivation.”

In the absence of Manyonga, Cuba’s 20-year-old rising talent Juan Miguel Echevarria stretched out to eclipse the South African's first-round lead of 8.21m to secure victory with a season’s best of 8.34m.

A women’s 800m race lacking Caster Semenya – for whom an invitation to compete came too late to be practicable – was won by Kenya’s Nelly Jepkosgei in 1min 59.50sec.

Ethiopia’s world 1,500m record holder Genzebe Dibaba produced a 2019 world-leading time of 3min 55.47sec, pushed all the way round the final bend and down the finishing straight by Sifan Hassan of the Netherlands, who was rewarded with a national record of 3:55.93.

It was a race of deep quality as seven women broke four minutes – with Jenny Simpson of the United States filling seventh place in a season’s best of 3:59.83.

The men’s 3,000 metres steeplechase, showcasing Morocco’s world silver medallist Soufiane El Bakkali, ended in something of an anti-climax as far as home fans were concerned as their man, having led for two thirds of the race, dropped away to finish a disconsolate last.

Victory went to Ethiopia’s Getnet Wale in 8min 06.01sec, a national record and the fastest run this season.

Salwa Eid Naser held off the challenge of Nigeria’s fast-finishing Aminatou Seyni to win the women’s 400m in 50.13sec, a season’s best which closed the gap on the time of 49.05 run by Olympic champion Shaunae Miller-Uibo.

The 21-year-old Bahrain athlete, winner of the Rome Diamond League earlier this month, moved into a marginal lead at the halfway point and was never headed thereafter, although Seyni pushed her to the line, being rewarded with a national record of 50.24.

It was a fine day in the field for Cuba as Yaime Perez earned an emphatic victory in the women’s discus with four successive meeting record throws, the last of them being 68.28m.

World indoor champion Sandi Morris produced a dominant victory in the women’s pole vault as she bettered the meeting record of 4.75m held by Greece’s world, Olympic and double European champion Katerina Stefanidi with a best of 4.82m, a season’s best.