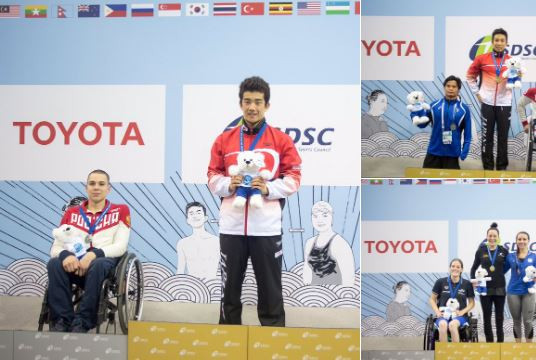 Sophie Pascoe of New Zealand set her second world record at the Para Swimming World Series in Singapore today as she earned 1,041 points in the women’s 50m freestyle after finishing in 27.69 seconds.

The nine-times Paralympic champion, an S9 category swimmer, had broken the record for the 100m freestyle on the opening day of this multi-class event at the OCBC Aquatic Centre, which will conclude tomorrow.

On the system of grading in Para swimming, the lower the S number the greater the degree of physical disability.

This can mean swimmers finishing behind others having a better result once categories have been taken into account.

Valeria Shabalina also added a second gold to her record in Singapore – the S14 swimmer won the women’s 200m freestyle with 1029 points after finishing in 02min 05.39sec.

A delighted @SophPascoe fresh from setting a new world record in the S9 women’s 50m freestyle! ?

In the men’s events, Islam Aslanov of Uzbekistan earned a place on top of the podium in the men’s 50m freestyle.

The S13 swimmer finished with 983 points after a time of 23.67sec, narrowly ahead of team-mate Muzaffar Tursunkhujaev – also an S13 entrant – who totalled 946 after clocking 24.22.

Roman Zhdanov, an SB3 category swimmer, picked up gold in the men’s 50m breaststroke final after earning 642 points for a time of 55.64sec.

Tomita’s compatriot Dai Tokarin, an S14 swimmer, won the men’s 200m freestyle event with a time of 01min 58.03sec, which earned him 966 points – just two more Zhdanov, who registered in the S4 category for this event.