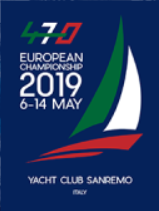 Racing could not be held today at the 470 European Sailing Championship with the direction and speed of the wind not stable on Marina degli Aregai in Italy.

Competition is now due to resume tomorrow.

"No race for today," a post on the event's official website's live feed reads.

"Tomorrow, the first warning signal will be at 12 hours."

Day one of action saw Australia’s Mathew Belcher and Will Ryan top the men's open standings.

They had wins in the first and third races with their eighth-place finish in the second discarded.