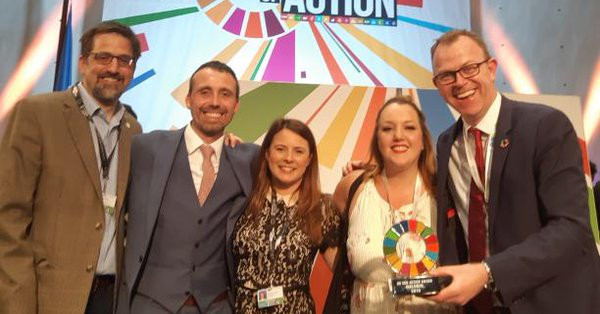 The International Paralympic Committee’s (IPC) "Transforming Lives Makes Sense for Everyone" campaign, which highlights the employment legacy of London 2012, has won a top international award.

The digital campaign - produced in partnership with the United Nations (UN) Human Rights Office and funded by BP and Bridgestone - secured a UN Sustainable Development Goals Action Award at a ceremony in Bonn in Germany.

The IPC picked up the award in the includer category, one of seven categories at the awards, which received more than 2,000 submissions from 142 countries.

Chief marketing and communications officer Craig Spence accepted the award on behalf of the IPC.

"It is a wonderful honour for our team, whose hard work and commitment made this series a reality, and a fantastic recognition of how the work of the Paralympic Movement helps to advance the UN’s sustainable development goals," he said.

"We would like to thank BP and Bridgestone, because without them we would not have even been able to implement this campaign.

"It is through their dedication, sponsorship and support of the Paralympic Movement that we can do this.

"Finally, we would like to thank the 4,237 people, the Para athletes, who competed at London 2012 and changed attitudes towards disability.

"Their amazing performances inspired the world and it is thanks to them that one million more persons with disabilities are in employment in Great Britain now.

"We have left no one behind for this campaign and we will continue to do it at Tokyo 2020 next year."

Launched in December 2018, the Transforming Lives Makes Sense for Everyone initiative featured three short film demonstrating, it is claimed, how London 2012 contributed to one million more people with disabilities securing employment in Britain.

The films detail the stories of several people who either played key roles in driving inclusive employment or secured employment following the Games.

By the end of January 2019, the films had reached 67 million people on social media, been viewed more than 28.5 million times and generated more than 1.4 million engagements.

In the first three films, British Paralympians were among those who shared their employment experiences and challenges.

She revealed her frustration at failing to secure employment pre-London 2012, despite holding a first-class master’s degree in mathematics.

With attitudes transformed thanks to London 2012, she secured a role as a Goldman Sachs analyst soon after the Games.