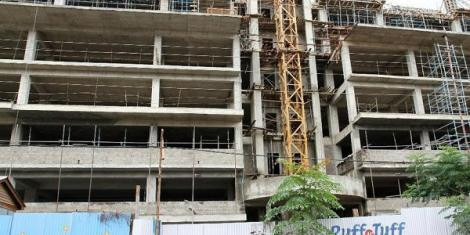 The National Olympic Committee of Kenya (NOCK) is seeking Government support to prevent its under-construction headquarters being auctioned off.

Development of the headquarters began in 2014 under the previous NOCK leadership, but stalled three years ago.

The 16-storey building had been set to be largely financed by Sidian Bank, who had been expected to contribute two thirds of the KES 1.2 billion (£9 million/$12 million/€10 million) cost.

The NOCK would then provide the remaining KES 400 million (£3 million/$4 million/€3.5 million) to complete the project.

It had been claimed the previous NOCK leadership had been aware they did not have the finances to contribute but expected to raise funds through innovative projects.

The funds were ultimately not achieved, leading to the project hitting the buffers.

The building is expected to be auctioned on April 5, according to an advert by Regent Auctioneers in the Daily Nation newspaper.

Paul Tergat, who became NOCK President in 2017, has appealed to the Kenyan Government for support to relieve the organisation of its debt for the building and to help complete its construction.

"We have tried everything to rescue this project,”" Tergat said, according to Citizen Digital.

"We have approached several banks to take up the loan and several other organisations which fund projects but, unfortunately, we have not been successful."

Tergat added:  "We have reached a point where only our Government can rescue this project since it has the financial source and ability.

"As part of its agenda to support infrastructure, we feel this is a project in the forefront as it affords the sports fraternity the opportunity of having strong administrative structures.

"We appeal to Government to support and fund not only the debt we owe but to further finance the project to its completion."

The NOCK had previously attempted to rescue the project themselves, with a Building and Property Committee established last year.

But the Committee has been unable to find a solution.

The NOCK has been faced with a series of issues in recent years, stemming from financial scandals which emerged at the 2016 Olympic Games in Rio de Janeiro.

Trials began earlier this month with former Sports Minister Hassan Wario among the six accused of numerous offences linked to scandal at the event in the Brazilian city.

The others on trial in Nairobi are Kenya's Director of Administration Harun Komen and Patrick Kimathi, the former finance officer at the country's Ministry of Sports, Culture and the Arts, Rio 2016 Chef de Mission Stephen Kiptanui arap Soi and former sports principal secretary Richard Ekai.