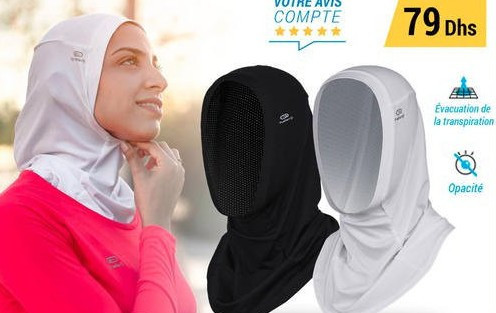 Sports shop Decathlon has been forced to withdraw from sale its "hijab de running" - a nylon hood designed to allow Muslim women to cover their hair while exercising.

But the item has sparked outrage in France as politicians from several groups have claimed it is a violation of French principles on secularism.

Last month, French feminist group, the International League for Women’s Rights (ILWR), called on Paris 2024 to ban the hijab and other forms of Muslim clothing.

ILWR founder Annie Sugier called for Islamic nations to be prevented from forcing female athletes to cover their entire bodies during competition as it is against the Olympic Charter.

The decision by Decathlon to stock the controversial item of clothing, originally created in Morocco at the request of customers there, caused an acrimonious public debate in France and virulent criticism on social media forced the sports retailer to suspend sales of the item in all its stores in France.

"The debate on this issue became hysterical and I regret that," she said on France Info.

In secular France, civil servants cannot wear hair-covering veils during working hours and face-covering veils are banned for everybody in the public space.

In 2016, several French seaside towns banned the body-covering burkini swimsuit worn by some Muslim women, arguing that the garment - which leaves only the face, hands and feet exposed - defied French laws on secularism and was causing public unrest.

But politicians from the right and left sharply criticised Decathlon for selling the sports hijab.

"Decathlon disowns the values of our civilization on the altar of market and communitarianism marketing," Lydia Guirous, an Algerian-born spokeswoman of the conservative Les Republicains party, said on her Twitter feed.

The International Boxing Association also recently changed its rules to allow female boxers to compete at international competitions while keeping their heads covered.