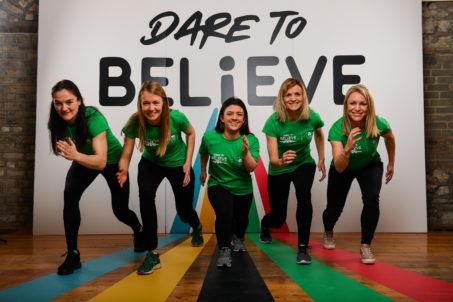 The Olympic Federation of Ireland (OFI) has launched "Dare to Believe", a school activation programme championed and supported by their Athletes' Commission.

Benefits of sport will be promoted in schools nationwide by some of Ireland's best known and most accomplished athletes in a "fun and interactive manner".

Involved in the launch were Irish lightweight women's world boxing champion Kellie Harrington, Irish Olympic rower Claire Lambe and Paralympic swimmer Nicole Turner, all of whom will be part of the programme which was developed by 2008 steeplechase Olympian Róisín McGettigan.

The aim of the programme is to promote the wider values of sport to children, and teachers and students will receive resource packs with a range of activities and information based on five rings.

"Olympism and Paralympism", "Healthy Mind and Body", "Joy of Effort and Courage" and "Respect, Responsibility and Equality" will be key themes.

The final ring is titled "Striving for Excellence" and involves a high-performance athlete or Olympian/Paralympian telling the class about their journey in sport.

The dual purpose of the programme is to help athletes develop their presentation skills and profiles, while providing a small additional revenue stream.

For the OFI, it is it is important to have a meaningful impact on children, and how sport can benefit them across a variety of realms, they claim.

It is intended that "Dare to Believe" will be developed further in the coming years, helping to bring the many values of sport and Olympism to the classrooms as well as helping athletes with their own story telling.

McGettigan, who competed in the 3,000 metres steeplechase at Beijing 2008, said: "When I came home from the Olympic Games, I was asked to speak at my local schools.

"I had all of these hard-earned lessons, international experiences and passion for my sport that I was bursting to share with the next generation, but I soon realised that presenting my story effectively was something I needed to prepare for.

"It got me thinking about what could be done.

"I'm delighted that the Olympic Federation of Ireland, the Athletes' Commission and the International Olympic Committee have backed this programme."