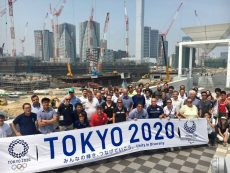 A recruitment process to find a Chef de Mission for the Tokyo 2020 Olympic Games and next year's European Games in Minsk has been launched by the Olympic Federation of Ireland (OFI).

In a first for the rebranded organisation, which changed its name from the Olympic Council of Ireland, the successful candidate will assume the position on a full-time basis.

Previously, the Chef de Mission has been a voluntary position at the OFI and the official chosen has been recruited internally.

The OFI have now decided to open up the role to beyond those already involved with the organisation and the process marks the first time that it is being advertised as a professional stand-alone role.

This is because of the "significant workload and meticulous project management skills required", according to the OFI.

Applications are now open until October 19.

"The decision of the Executive Committee to appoint our Chef de Mission for team Ireland as a professional stand-alone role is a significant milestone," said OFI President Sarah Keane.

"Coming at a time of ever closer cooperation with Sport Ireland and the Sport Ireland Institute it represents another important building block in team Ireland’s games preparations.”

The Chef de Mission will be tasked with leading the Irish delegation at the 2020 Olympics in the Japanese capital and the 2019 European Games in Minsk.

Kevin Kilty held the role at the 2016 Olympics in Rio de Janeiro, where then President Pat Hickey was arrested on ticket scalping charges.

"This is an exciting opportunity for a suitable person to drive and shape team Ireland’s participation at the 2020 Olympic Games in Tokyo and at the European Games in Minsk 2019," OFI chief executive Peter Sherrard added.

"For the first time we are creating a professional stand-alone role, to reflect the significant time, travel and attention to detail that is required