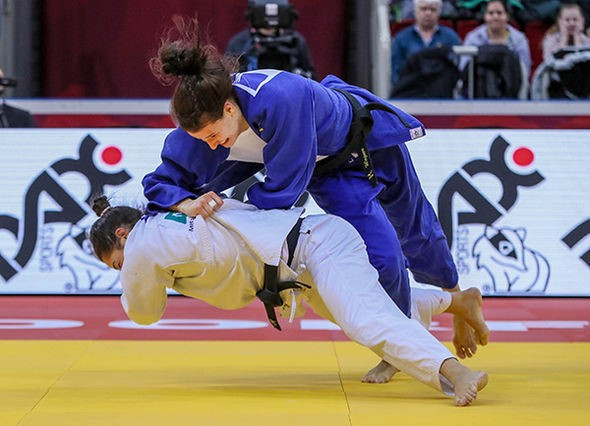 Home hopes of gold were dashed on the final day of the International Judo Federation (IJF) Grand Slam in Düsseldorf as Anna Maria Wagner suffered defeat in the women's under-78 kilogram final.

Wagner progressed through to the final at the ISS Dome in the German city, with her run including a win over Slovenia's Klara Apotekar in the semi-final.

She would suffer defeat in the final as Brazil's Mayra Aguiar was awarded a waza-ari score, which proved enough to top the podium.

Bronze medals were earned in the division by Apotekar and Austria’s Bernadette Graf.

Japanese judokas had dominated the opening two days of competition as they scooped seven of the nine titles.

Sarah Asahina was unable to add to their haul in the women's over-78kg event, with Cuba's Idalys Ortiz triumphing in their head-to-head duel.

Mehdiyev was awarded a waza-ari score during the contest to overcome his Japanese rival to claim the Grand Slam title.

The pair were joined on the podium by The Netherlands' Jesper Smink and Russia's Mikhail Igolnikov, who won their respective bronze medal matches.

A superb weekend for Japan would conclude with victories in the men's under and over-100kg competitions.

Kentaro Iida triumphed in the under-100kg event as he clinched a win against South Korea's Cho Guham, with a waza-ari score enough to separate the duo.

Hisayoshi Harasawa emerged as the winner of the over-100kg division, courtesy of a win over Russia's Inal Taseov in the gold medal bout.

Harasawa delivered a match winning ippon to secure top spot on the podium.