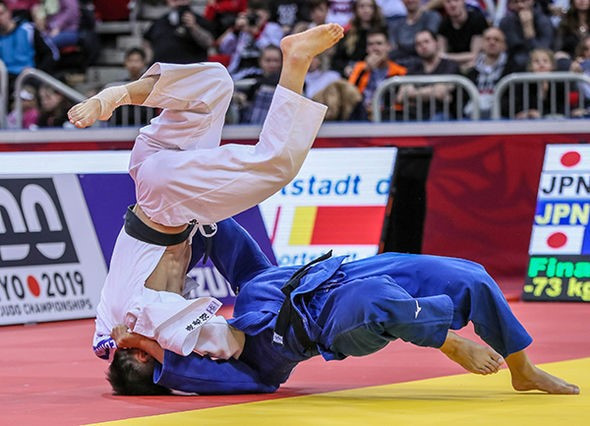 Japanese domination was the order of the day again at the International Judo Federation (IJF) Grand Slam in Düsseldorf, as only Britain's Sally Conway was able to halt the country's gold rush.

With two days of competition having taken place at the ISS Dome in the German city, Japanese judokas have won seven of the nine titles on offer.

Their strength in depth was in evidence in the men's under-73 kilogram competition as Olympic champion Ono Shohei faced three-time World Championship gold medallist Ebinuma Masashi in an all-Japanese final.

The duo have both come from the same high school in Japan to enjoy illustrious careers.

Ono would emerge as the victor on this occasion as a waza-ari score proved enough for him to win the final and top the podium.

The second was earned by Azerbaijan's Rustam Orujov, who beat Russia's Musa Mogushkov in the same manner.

Sotaro Fujiwara continued his recent success in the men's under-81kg event, as the Japanese judoka earned a third title in his last four Grand Slam competitions.

He forced Aslan Lappinagov to concede three shido penalties in the gold medal bout, which saw Fujiwara take gold as his Russian opponent was forced to accept silver.

The third Japanese gold medal of the day came in the women's 63kg competition, courtesy of Miku Tashiro.

Tashiro triumphed courtesy of an ippon against Russia's Daria Davydova in the gold medal bout.

Her compatriot Masako Doi and Slovenia's Andreja Leski rounded off the podium with victories in their respective bronze medal bouts.

No Japanese judoka would appear on the podium in the women's under-70kg event, as Britain's Conway stormed to victory.

Having advanced through the early rounds to the final, Conway was able to claim a third Grand Slam gold of her career.

She saw off the challenge of Germany's Miriam Butkereit to emerge as the winner in the division.

Competition in Düsseldorf is due to continue tomorrow.