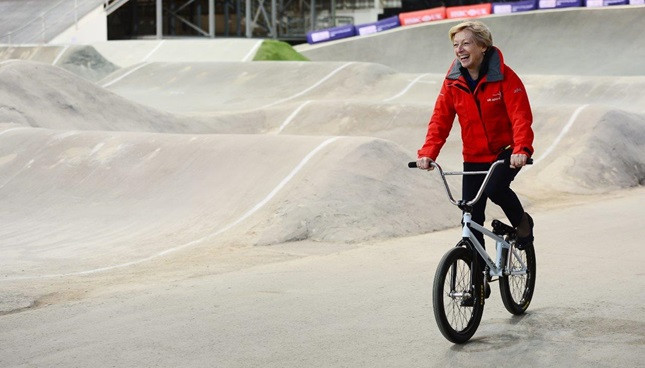 Liz Nicholl has announced that she will step down as chief executive of UK Sport in the summer of 2019.

She will leave the organisation - which invests Government money into British Olympic and Paralympic sports - after 20 years in leadership positions and nine as chief executive.

Nicholl, whose career has spanned 10 Olympics and Paralympics, said she made the decision to focus on her family and other interests with the search for a successor due to begin imminently.

UK Sport are hopeful that there will be a "smooth transition" and handover prior to Tokyo 2020.

The 66-year-old Nicholl joined UK Sport in 1999, two years after the organisation was formed by Royal Charter.

This followed Britain's poor performance at Atlanta 1996 when the country finished 36th in the medal table with just one gold medal.

Since then the country's fortunes have been transformed, with the creation of the National Lottery and UK Sport funding credited as factors behind Britain's second-place finish at Rio 2016.

The country won 27 gold medals in the Brazilian city.

Nicholl's term also saw a home Olympics and Paralympics in London in 2012, although UK Sport has faced criticism from some due to its approach of heavily funding sports where medals are seen as likely, while cutting the cash given to others.

"It's been a huge privilege to work with so many committed and talented athletes, coaches, leaders, partners and colleagues during my time at UK Sport," said Nicholl.

"I have shared a very special journey with everyone that has been part of our very successful high performance system over the past 20 years.

"Our athletes are undoubtedly among the very best prepared and supported in the world and I am confident that we can continue to build on the successes of recent Games.

"Tokyo 2020 performance is on track and preparation for the Games environment in Japan is being expertly led and supported by the British Olympic Association and British Paralympic Association.

"The UK's international reputation as an ambitious, innovative host of major and mega events delivered to quality standards is at an all-time high and enables us to showcase our successful British athletes.

"The UK is also leading the way in addressing sports governance and integrity challenges and we continue to contribute positively to sports policy and development around the world.

"This really is the best job in sport and I have enjoyed every minute of it.

"I am confident that it will attract some great applicants and my successor will find British sport in a good position to realise our vision of inspiring the nation in Tokyo and beyond."

Dame Katherine Grainger, an Olympic rowing champion and chair of UK Sport, added: "I cannot thank Liz enough for everything she has done for British sport in her time here.

"We must never forget the transformation that has occurred under her guidance nor take for granted how many people, myself included, who have been able to realise their potential because of her tireless work."